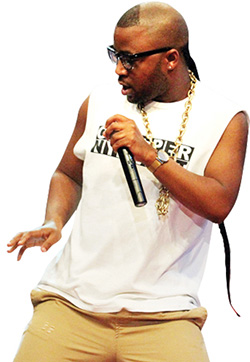 THERE is an air of excitement among hip hop fans and artistes in Bulawayo following reports that one of South Africa’s leading Hip Hop artists, Cassper Nyovest, will perform in the city next month.
Nyovest real name Refiloe Phoolo, a talented multi-award winning muso, is slated to perform at Hartsfield Rugby Ground on April 25.
He will be supported by a host of local artists who include hip hop star Cal_vin, tribal house outfit Djembe Monks and dancehall stars Winky D and Soul Jah Love.
The show, made possible by the combined efforts of 3D Events and Management, Chipaz Promotions, The Odyssey of Kadoma and Dj Dee Nosh, has been touted as the ideal platform to promote the genre which has played second fiddle to the popular house music genre.
In separate interviews with NewZimbabwe.com, Bulawayo-based Hip Hop artists believe the genre is on the right track.
“Bulawayo hip hop is definitely on the right path. With a bit of structure we will be seeing more progress at a faster rate,” said rapper, Naboth Rizla.
“We are finally getting more attention than a few years ago so it is a good thing to finally get noticed not just nationwide but globally.”
Rizla believes the small efforts by individual artists have kept the genre alive and he hopes the corporate sector will soon come on board to offer the financial support they desperately deserve.
“The good thing is we have finally decided to take it upon ourselves to make everything happen and, with time, the corporates and everyone else will catch on to the buzz.
“Instead of waiting for promoters to make shows for us we are seeing artists creating platforms to promote themselves,” said Rizla.
Cassper Nyovest – Phumakim