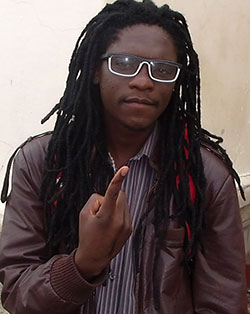 UPCOMING Bulawayo based hip-hop artiste, Titus Marume aka MC Tytoh last week launched a scintillating 14 track album entitled Micnificent.
The launch of the debut album which also features respected Bulawayo rappers Calvin, Prozac Lik, Nemo and Chrystalline coincided with the Kings of kings rappers tournament which was held at a local pub.
Two of the songs on the album, Next on the Line and Tables Turn were produced in Ireland under Valentino Music.
“This album, which includes both old and contemporary rap music, is basically a representation of my life,” said the 33-year-old artiste in an interview with NewZimbabwe.com.
“The songs, Victory and Tables Turn literally summarises the long musical journey which I have travelled since I started my musical career in 1999.These songs can also fit in anyone’s shoes who has had my experience.”
Some of the songs on the album reviewed by this reporter include the gentlemen, Khanda Shisa and Abafazi which talks about the beautiful ladies in Bulawayo.
Marume started in musical career in 1999 while doing his A Level studies Methodist College in the city. He is one of the founders of a seven-member group called Killar Klan which would go around the city and high density suburbs doing rap battles.
“I fell in love with Hip hop music whilst I was still 17. Our crew was one of most respected groups those days,” he said.
“We used to be invited at school bashes and beauty pageants and this exposure gave me a lot of confidence and experience.”
In 2005 Marume decided to temporally take a sabbatical from music and ventured into film production.
Together with Tawanda Mauchaza and the late Andrew Mavangwa, he produced and directed a 50-minute feature film, Sweetie November which was featured on DSTV’s Africa Magic Channel.
Marume is also currently working on another movie project on women abuse and domestic violence.
“A lot of people misconstrue women abuse and domestic violence as the actual physical bashing of women,” he said.
“There are other forms of abuse against women and girls which are hardly highlighted. This movie therefore tries to address this problem.”
Casting for the movie will commence next month while work is also continuing on a video for the song Khanda Shisa.Advertisement