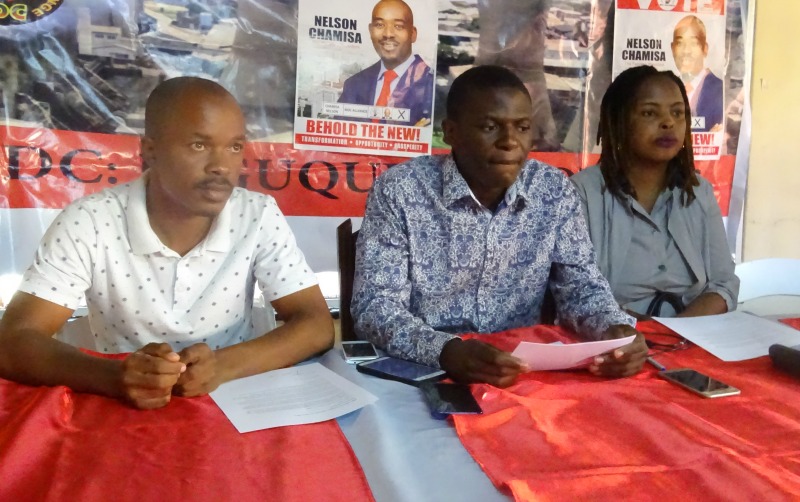 Pashor Sibanda at the press briefing
Spread This News

The outspoken traditional leader was on Wednesday physically attacked in Bulawayo’s CBD in full view of the public.

Reports said his attackers also tried to seize his car but failed to do so as the defiant traditional leader threatened to burn the vehicle.

Ndiweni torched a storm recently when he came out bluntly in support of western imposed sanctions against the Zanu PF led government.

He was adamant President Emmerson Mnangagwa and his administration have failed to lift the fortunes of the country as was witnessed by massive poverty within the populace.

At a press briefing in Bulawayo Thursday, MDC provincial secretary general for Bulawayo, Pashor Sibanda likened the attack on Chief Ndiweni to an act akin to the 1980s Gukurahundi hostilies in which 20 000 civilians died in the hands of then Prime Minister Robert Mugabe’s army.

Sibanda said Chief Ndiweni was targeted for his forthrightness.

“The attack of the Chief by suspected Zanu PF thugs is a clear statement by the Mnangagwa regime of its intentions to continue to pursue their Gukurahundi agenda as a way of silencing progressive voices.

“As the MDC Bulawayo youth assembly, whoever attacks the (iconic Chief) Rekayi Tangwena of our generation is our enemy,” said Sibanda.

But the MDC secretary general implored the government to tolerate divergent views among citizens.

“We may have different ideologies but Chief Ndiweni is our chief. He must be respected.

“We have no doubt that the great Chief Ndiweni is being harassed by Zanu PF because of his strong support of his people. He stands with the people he leads, he feels the pain of his people,” said Sibanda.

The youths vowed to continue supporting the chief in fighting corruption and other ills.

“We have no doubt that the great Chief Ndiweni is being harassed by Zanu PF because of his strong support of his people. We will always be in support and in solidarity with any good cause with him.

The youths also urged the government to investigate the attack on the chief.

“This attack should be immediately investigated. Those who are responsible for the attack should be arrested. It is very much disturbing to hear some rowdy, rogue elements have attacked one of our chiefs,” Sibanda said on behalf of party youths.