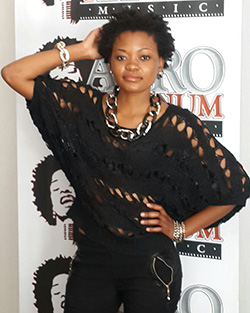 BULAWAYO based self-styled music princess, The Kasi Princess (TKP) believes the time has come for her to take up her place among the stars in the country’s music industry.
TKP, real name Sandisiwe Dube, one of the few female musicians carving a name on the House music scene, seems to have struck the right chord as she is getting a lot of attention from local radio stations.
Her track, Mhururu, is receiving a lot of airplay and her efforts to perfect her craft seem to be finally paying off.
Dube’s latest studio album, Salibonani, has also been well received well by house music fans.
She recently got a nomination – the first in her career – in the Zimbabwe Music Awards (ZIMA), in the best house music category.
TKP will go up against Skaiva, Defined House, stablemate Squash and J dot.
She is signed to Afro Platinum Music label, with operations both in Zimbabwe and South Africa.
Recently, she curtain raised for South African tribal house music duo, Black Motion, when they performed at Hartsfield Ground in Bulawayo.
She is also lined up to perform at the Star FM People’s Awards slated for 5 December at the giant Harare International Conference where she will share the stage with big names such as the multi-award winning South African songstress, Zahara, Jah Prayzah and Sulumani Chimbetu.
In an interview with NewZimbabwe.com, TKP said while she appreciates the opportunities that have come her way, she still has a long way to go.
“I have just released my album and I’m starting to receive recognition but I do not think this is my biggest song. I’m going to do bigger projects,” she said.
Dube said she was excited to have nominated for the award.
“Even if I do not win the award, I am already a winner.
“To be nominated with artists like Skaiva and Defined House who have been in the industry for a long time really means a lot to me,” said an excited TKP.
She through sheer hard work, she will ultimately achieve her goal of performing at international stages and her performing at the HICC is a sign that she is in the right direction.
Her fans can expect a video for one her smash hits, early next year. Advertisement