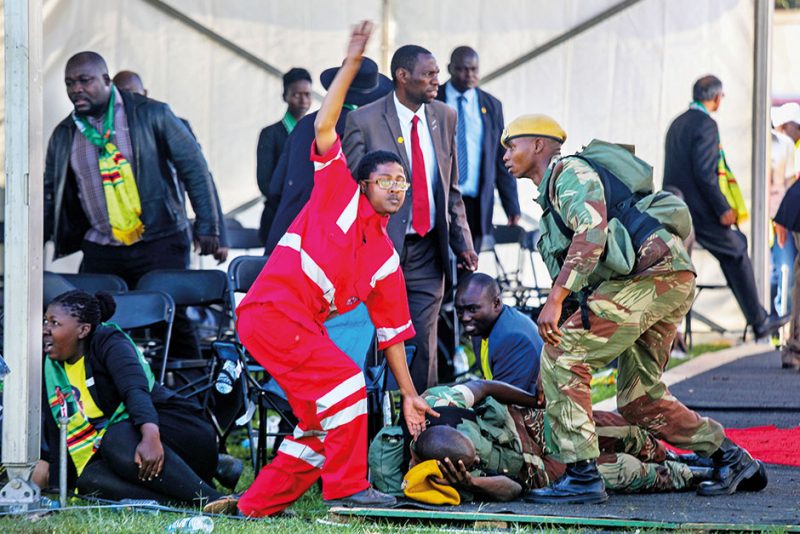 TWO people died Monday from injuries sustained in the explosion which rocked a rally addressed by President Emmerson Mnangagwa in Bulawayo Saturday.

The first fatalities from the still unexplained blast were confirmed by authorities at Mpilo Central Hospital in the country’s second largest city.

“May the deceased’s souls rest in peace,” added Zanu PF Makokoba Member of Parliament Tshinga Dube who was also injured on his ankle during the attack.

National police spokesperson Charity Charamba said she had not been briefed when asked about the development.

“I’m on my way to the office now but I have not yet received the news, so I cannot confirm now,” said Charamba.

Although the identities of the deceased have not yet been revealed, NewZimbabwe.com is reliably informed that both were VIP security aides.

The explosion occurred just after Mnangagwa finished addressing the rally and as he was making his way off the VIP stage.

The Zanu PF leader escaped unscathed, but some 49 people were injured including vice presidents Constantino Chiwenga and Kembo Mohadi.

Mnangagwa believes he was the target of the blast, adding it was the latest in a series of assassination attempts by enemies he has not identified.

Nothing has been revealed about the nature of the device which exploded with police only appealing for information to assist ongoing investigations.

The government has insisted that elections will go ahead as scheduled on July 30 and offered State protection to presidential candidates concerned their security in the wake of the incident.

The African Union as well as countries such as South Africa, Britain and the United States have since condemned the attack.