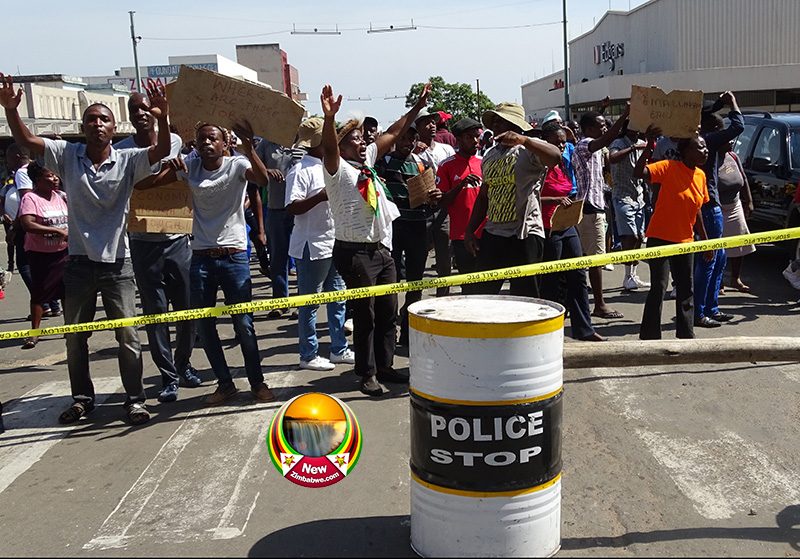 POLICE engaged in running battles with protesters in Bulawayo Monday as the country’s second largest city was effectively shut down by angry locals protesting against the government’s fuel price hikes.

The protests erupted around 9am in the morning with commuter omnibuses barred by protesters from ferrying passengers into the city centre, in response to calls for a stay away demonstration by labour unions and activists.

In high density suburbs like Cowdray Park, Nketa, Nkulumane most commuters were stranded as rowdy protesters used boulders, bins to blocks most of the roads forcing commuter omnibus operators from servicing their routes.

A handful of protesters responded to social media messages distributed Sunday calling for people to gather at the Bulawayo City Hall to march in protest against the fuel price increases.

The group of about 100 placard waving protesters, who were singing the popular protest song, “Into Oyenzayo Siyayizonda (We do not like what you are doing) marched from the City Hall towards Tredgold Building which houses the Bulawayo Magistrates courts.

The protesters broke down barricades that had been put up along Herbert Chitepo in preparation for the opening of the 2019 legal year at the Bulawayo High Court.

Two female police officers and two judiciary officials fainted as a result of tear smoke while scores of people including one elderly woman walking near the High Court were injured in the melee.

“These riot police officers are being overzealous. How can they throw tear gas at the High Court where there are other police officers. They must be under the influence of drugs because this behaviour is strange,” said one of the ZRP officers.

The official opening of the High Court was delayed for almost three hours while the ceremonial parade was cancelled due to tense situation in the city.

MDC youth leader and ward 1 councillor Mlandu Ncube, who was part of the protesters, said the demonstrations will continue until President Emmerson Mnangagwa steps down from power.

“We will continue to protest until President Emmerson Mnangagwa steps down,” vowed Cllr Ncube.

The ZRP was forced to deploy anti-riot police and water canon to try and quell the protests.

Shop owners were left counting the costs after Choppies outlets in Pumula East and Entumbane were looted while a pharmacy at Nkulumane shopping centre was also ransacked and some of its stocks looted.

A police vehicle was also overturned in Pumula East suburb.

At about midday, the city centre resembled a ghost town as police had dispersed people and shops had shut down operations.