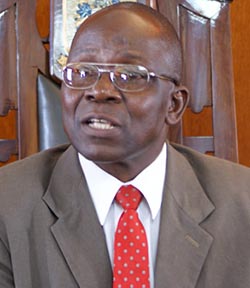 BULAWAYO mayor Martin Moyo is set to visit France next month in a bid to woo investors from that country to revive the city’s ailing manufacturing sector, council minutes have shown.
Zimbabwe’s second largest city, once the country’s manufacturing hub, has seen over 100 companies close in recent years with its perennial water problems cited as the main reason.
The city’s industry needs an estimated $500 million in the short term to recapitalise, economic analysts say.
According to the Bulawayo City Council minutes, Moyo was invited to attend the Prime Business Destination Forum in Cannes France on October 12 where he would present the City’s Investment and Social projects.
“The Town Clerk reported (3rd August, 2015) that an invitation had been received from the Europe Business Assembly for the Mayor of Bulawayo to attend the Business Destination Forum to be held in Cannes France on 12th October, 2015,” reads part of the report.
“Bulawayo had been selected as the city with high investment and tourism potential, and was expected to receive a Flag and Certificate from the EBA Prime Business Destinations Programme.”
Bulawayo municipality last year suspended its stringent water rationing programme — seen as the most detrimental to investment.
As part of the council efforts to lure investors into the city, Bulawayo has opened up expanses of vacant land in various suburbs for development and investment.Advertisement