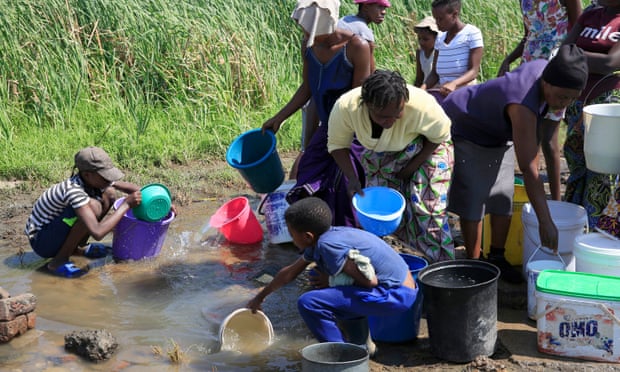 FILE PHOTO: Residents of Bulawayo's Luveve suburb fetching water from a nearby stream
Spread This News

SOME Bulawayo suburbs are set to go for several days without water following a burst pipe connecting Ncema Dam and Fernhill pump stations.

“The City of Bulawayo would like to advise members of the public of water supply interruptions to all areas fed by the Tuli Reservoir.

“This is due to a burst which occurred on the clear water line supplying the Tuli reservoir, between Ncema and Fernhill pump stations.

“The City of Bulawayo will temporarily suspend the current 72-hour water shedding programme in the Tuli reservoir zone until the burst pipe is repaired,” said Zhou.

Some of the suburbs, which are going to be affected by the pipeline breakdown include, Lochview, Sunninghill, Marlands, Glencoe, Riverside, Waterford, Manningdale, Willsgrove, Buena Vista, Douglasdale, Fortunes Gate and Selborne Park.

The acting town clerk said the affected suburbs will go without the precious liquid until the burst pipe is repaired.

She said pumping will only resume once repair works have been completed and when Tuli water reservoir has been raised to acceptable levels.

Zhou urged residents to conserve water and keep taps turned off in the event that the work is completed soon.

The city has already decommissioned two of its dams Umzingwane and Upper Ncema.