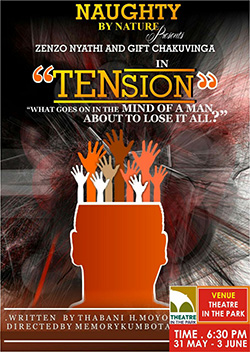 THEATRE in The Park and Naughty by Nature from Bulawayo will this week stage the play ‘Tension’, a political satire which explores political succession with the ‘Chief’ believing that is the agenda being pushed by his close allies.
Running from the 31st of May to the 3rd of June 2016, the play is set in a present-day African country that mixes modern and traditional styles of leadership.
The plot is precise, hard hitting and unravels when the Chief faces an internal revolt from his inner circle.
The two-man play was written by Thabani Moyo and is directed by Memory Kumbota.
It will feature amazing story tellers in NAMA Award winning actor Zenzo Nyathi who has featured in more than 30 stage plays and Gift Chakuvinga (NAMA winner for The Best Actor for 2014), who has featured in more than 10 theatrical work.
Seasoned director Kumbota recently directed The Taking and The Impotent Son-in-Law which were successfully stage at Theatre in The Park.
Tension explores in the Chief’s psychological state when he faked an illness to avoid attending the internal elections of the Interior Décor so he could secretly meet with his trusted Ibutho (General).
Nerve wrecking dialogue
The two engage in nerve wrecking dialogue as they analyse the state of The Kingdom and its major political plays.
The two expose how they have stayed for a long time in power by manipulating state apparatus like media.
It becomes clear to Ibutho, during their conversation, that the Chief is unsettled because of the elective meeting taking place in his absence.
It also becomes clear that the two are not friendly with the international community as they have come up with plans to bar any foreign diplomatic visitors.
Their conversational inquest delves into the succession issue which the Chief believes is the agenda being pushed by ambitious elements within the Interior Décor. His plan, he says, is to crush them once they are exposed.
Chief faces challenge
As the day progresses, news from the Interior Décor start trickling in through telephone conversations with the Organising Secretary.
The position of the Chief faces imminent challenge. The chief is agitated. He claims that he is a democrat while at the same time exhibiting serious signs of dictatorship.Advertisement

The final telephone call drives the Chief nuts as he prepares His Kingdom for Military rule.
Writer Thabani Moyo also wrote the record breaking theatrical piece Umbiko Kamadlenya scooped all the NAMA awards for the theatre sector in 2014.
He also penned The Immigrants which was show cased at Intwasa and HIFA in 2012 and the Immigrants script which was voted among the top 5 African scripts in a competition run by the Germany Theatre Company Theatralize in 2014.