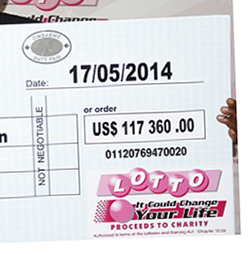 A LUCKY Bulawayo syndicate of six people clichéd last week’s $117,000 lotto jackpot in a development likely to change for the better the members’ lives.
Chairman of Hackers Club syndicate, Bishop Mhlanga, was presented with the windfall at Mashonaland Turf Club in the city on Thursday.
“We bet as a syndicate of six. We began betting during the days of the state lottery before lotto started,” said Mhlanga
The group said it places bets of between $100 and $200 every week using the same combination of numbers.
“We have a stack of about 200 permutations of numbers that we use to place bets every week. We actually started betting the combination that won the jackpot last year,” said Mhlanga.
They also won $700 the previous week.
Mhlanga said they would share the latest windfall equally.
A member of the syndicate discovered the win from the newspapers but could not believe their luck until they had verified with the Mashonaland Turf club.
Mhlanga said he planned to use his share in his farming enterprise.
Mashonaland Turf Club operation executive Howard Mukundu said the lotto was aimed at changing lives adding that since the start of the multi-currency regime about $2 million dollars had been paid out to charity.
“Lotto has been changing lives since its inception in 1999. A total of 124 punters have walked away with the jackpot,” said Mkundu.
Since 2009, 17 lucky punters have won the jackpot with the biggest with a staggering $307, 000.Advertisement