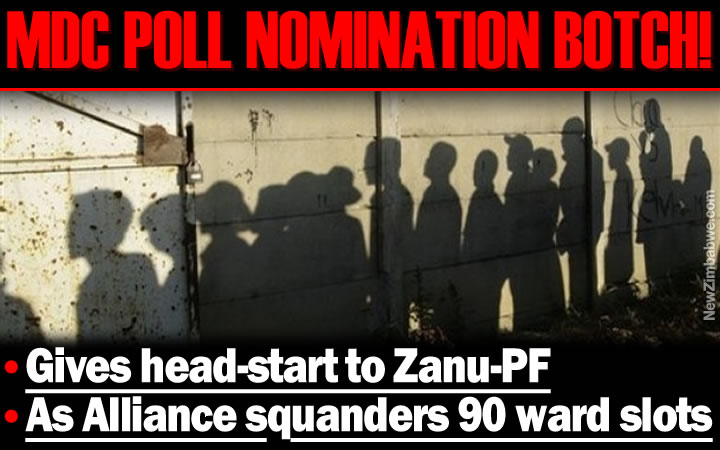 THE MDC and its alliance partners have given arch-rivals Zanu PF a precious head-start in next month’s general elections after failing to field candidates in 89 council wards throughout the country.

The main opposition, which has spent an agonising 19 years trying to dislodge Zanu PF, has roped in opposition allies under the banner of the MDC Alliance in attempts to gain the much needed numerical edge to out-poll the ruling party in national elections.

But a series of gaffes in the past few months have exposed the main opposition’s strategic flaws with the latest being its failure to field candidates in Insiza North parliamentary constituency and three other council wards.

This allowed Zanu PF to bag the seats unchallenged.

It has also emerged the MDC Alliance has also failed to challenge for an additional 86 ward seats in parts of the country.

This was revealed by MDC representative to the EU, Grace Kwinjeh in a statement following a party workshop called for MPs and district chairpersons at Morgan Tsvangirai House.

“MDC Alliance managed to successfully field 209 out of 210 members of assembly,” she said.

“Party leadership to deal with double candidates in some constituencies.”

While the seats have not yet been declared won because other opposition parties and independents outside the MDC Alliance have challenged for them, Zanu PF is almost certain to romp to victory in those places as its only formidable opponent is the Nelson Chamisa led opposition front is out of the picture.

The seven party anti-Zanu PF front has been dogged by internal squabbles that have seen MDC top officials freezing out from nomination, candidates seconded by coalition colleagues as per agreement.

Party officials linked to the candidate selection debacle insist they were prompted to elbow out less known coalition candidates in place of party politicians with a bigger grassroots appeal.