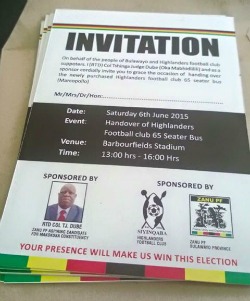 THE Sunday Premier League derby between high riding How Mine and Bulawayo giants Highlanders is overshadowed by a controversial bus handover.
The bus will be handed over to Bosso on Saturday by Vice President Emmerson Mnangagwa and Makokoba by election Zanu PF candidate Tshinga Dube.
But the Highlanders family is feeling uneasy over the politicians’ presence at Barbourfields, Bosso’s home ground.
Both the politicians and Highlanders executive have felt the pressure and have moved the intended rally to White City Stadium, away from the Bosso fans.
Zanu supporters have also been asked not to wear party regalia at the function.
After a slow start to the season, How Mine have risen to fourth on the log on the back on the back of three consecutive wins and have amassed 21 points to sit five points behind leaders Chicken Inn.
On the other hand, Highlanders are seventh on 18 points and still within reach of their opponents on Sunday.
Addressing his weekly press conference in Bulawayo on Thursday, Bosso coach Bongani Mafu said all he needs is the backing of the fans after seeing a spirited display in last Saturday’s 2-2 draw against FC Platinum at Mandava.
“I would like to make an appeal to the Highlanders supporters to continue supporting the boys the way they did at Platinum.
“I know we are all worried about the lack of flair in our play but we also feel that if we get our twelfth man standing by, we are going to turn Barbourfields into a fortress that no one should breach.”
“The people supported the boys until that confidence came back and when the confidence came back we started moving, supporting, marking and doing everything that excites the fans,” he said.
Luke Masomere, still grieving the loss of his wife two weeks back, says is ready for a tough battle.
“This will be a tough match, but people must realise that we have been picking up points of late and so we are ready for the big match.
“There is more to the game than just points; it is about the bragging rights in the city. The players stay together and know each other very well and some have even played together,” Masomere said.
Charles Sibanda, Munyaradzi Diya, Mernard Mupera, Mgcini Sibanda and Gilbert Banda are all former Bosso players now at How Mine while Edmore Muzanenhamo crossed the floor from the Metallon Gold-sponsored side to the Bulawayo giants.Advertisement

In other matches, FC Platinum make the long journey to Hwange on Sunday-a favourite hunting ground where they have not lost a match since 2011. Hwange lost 1-0 to Chapungu last week and are desperate for home comforts.
Leaders Chicken Inn are away to Chapungu at Ascot Stadium on Saturday, hoping to maintain their grip at the top of the ladder, provided results at Nyamhunga where ZPC Kariba host Dynamos go their way.
Caps United have a date with Flame Lily, who this week fired coach Nesbert Saruchera, at the National Sports Stadium on Sunday.
The Green Machine have seen a change of fortunes since Harare businessman Farai Jere took over the club three weeks back and have responded with seven points in three matches.