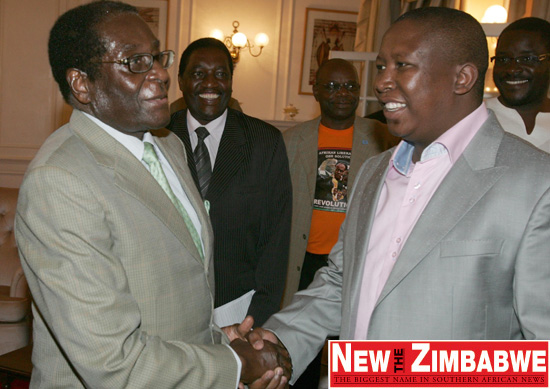 DOES Africa have artificial human lions? If so, would you agree that President Mugabe and Hon. Malema are the true lions or warriors of Africa? If not, what would your reaction be when you hear them being described as the true lions of Africa? How best can economic justice, freedom and prosperity bee secured?
When one looks back at this month of November in this year of the Lord, 2015, it will have dawned that 50 years ago on 11 November 1965, some hustlers in the then territory named South Rhodesia, declared that henceforth they would dissolve the bonds that had connected them with the United Kingdom, the country that is currently hosting the Commander-in-Chief (CIC”) of the Economic Freedom Fighters (“EFF”), Hon. Julius Malema, who addressed the Oxford Union on Wednesday, 26 November 2015.
Hon. Malema’s title, CIC, is instructive for it certainly must have been a product of a great idea that what was about to unfold from the operation of the idea informed the formation of the EFF as a political formation in South Africa, the most diversified and developed African economy, was an imagined battle to do what the late President Mandela and others are daily accused of failing to deliver and realize.
The choice of an adversary in the imagined war as the “white monopoly capital” was not an accident but reflected the understanding of the authors of this kind of narrative of what the people of South Africa needed to do to best secure true independence and self-determination.
Hon. Malema, having been dismissed from the African National Congress, the ruling party currently led by President Zuma, assumed the role of a leader of a struggle that, in his worldview, was a continuation of the anti-apartheid struggle and, therefore, needed to be waged in the quest to reduce the frontiers of inequality, poverty and unemployment.
Indeed, Hon. Malema regards himself as a “New Lion” of Africa clothed with sufficient wisdom to attack the role played by the late Nelson Mandela, a man the world has recognised as a critical actor in building the foundation of South Africa as a constitutional democracy, as an active protagonist for a forward leaning post-apartheid state.
This month also saw President Mugabe, the current Chairperson of the African Union (“AU”), attending on behalf of the AU the G20 summit held in Antalya on 15-16 November 2015.Advertisement