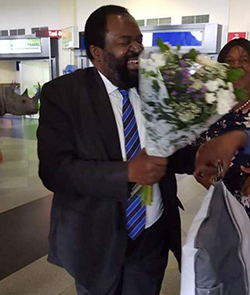 BUSINESSMAN James Makamba has returned home after 17 years in self-imposed exile.
The tycoon skipped the borders after being slapped with externalisation charges of significant sums including $2, 2 million, €3,7million and R15 million.
He returns after last month’s military coup which toppled former president Robert Mugabe and saw Emmerson Mnangagwa taking over power.
There have also been claims of a fall-out between the tycoon and Mugabe.
Meanwhile businessman claims his return home follows an invitation to do business by the country’s new president in 37 years of independence.
“Anyone who has stayed away from their respective home for an extended period of time will tell you that it’s no fun. So much happens, in my case I lost a dear daughter, Chiedza, known to most people,” Makamba said.
“Friends, relatives and family had to stand in on my behalf on her burial, a thing that I found extremely painful. However, life goes on.
“We are answering the call by the new president Cde Mnangagwa to come home, work with other in rebuilding our economy because Zimbabwe is going to be great once again.”
Also a philanthropist and former Zanu PF politician, Makamba has interests in the retail sector, telecommunications, mining, agricultural, property and consultancy.
He once worked for the national broadcaster, the Zimbabwe Broadcasting Cooperation, as a disc jockey and was part of a consortium which won the license to operate the country’s second mobile telecommunications company, Telecel.Advertisement