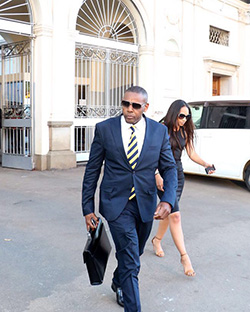 PROPERTY magnate Frank Buyanga has taken his fight to reverse the seizure of several assets under Hamilton Property Holdings (Hamilton) and Rivin Venam Trading (Rivin) to another level by filing fraud charges against a Harare lawyer, and three others, who have been battling to recover money allegedly paid for a Glen Lorne house.
Although the 36-year-old businessman’s major targets were Tawanda and Winnie Jakachira, and an ex-property sales agent Simon Charewa, the Hamilton boss has chosen to spotlight commercial lawyer Tamuka Moyo’s role in sustaining demands for a $120 000 refund over the botched sale of the 5 200 square metre property held under Rivin.
And as the dispute rages, the couple was on the cusp of seizing another Greendale house and quite a number of Buyanga’s assets from other properties, to recover funds from the alleged sale of Rivin shares in 2010, which the latter disputes.
“…proceedings pursuant to which the writ of execution against the property in question was issued was based on fraudulent misrepresentation… at the instance of the first and second respondents (Tawanda and Winnie),” the flamboyant businessman said in an urgent High Court application in response to Moses Chinhengo’s arbitration award and which also gave rise to the property seizures.
“The applicants were not aware of and did not authorise… Charewa to represent the arbitration proceedings… The first applicant (Buyanga) only got to know of the… execution against his property and intended sale, but did not sanction the defending processes leading to the granting of the arbitral order,” Buyanga contends.
According to the court papers, Charewa was not only disallowed from signing the Rivin sale papers, but only the judicial manager of the Hamilton Group could sanction the disposal of any property holdings.
“….applicant has filed a police report against the first and second respondents (Charewa, and Moyo) for masterminding a fraud against him…,” the feisty businessman said, before challenging the Jakachiras to provide proof of the “full purchase price” paid to him.
Jakachira, who was in 2008 tried for engaging in illegal foreign currency deals, is however, holding out that he had paid Buyanga through a letter written by Charewa.
According to their claim, the Harare couple was to take vacant possession of the Borrowdale property — described as 2308 Glen Lorne Township of Lot 40 A — after signing a memorandum of agreement with Rivin’s representatives.Advertisement

And as the dispute continues, Buyanga and the respondents are back in court on Monday for a determination on whether the Greendale attachments were lawful or not.