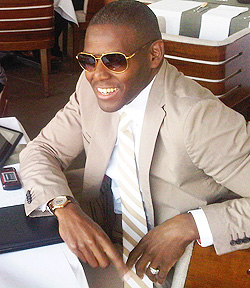 PROPERTY and insurance tycoon Frank Buyanga has regained his $320,000 Rolls Royce Ghost seized by South African authorities in December 2010, and later auctioned off.
The millionaire businessman imported the expensive motor from the United Kingdom through South Africa – but soon ran into trouble with the South African Revenue Services (SARS) which claimed he had failed to prove his ownership.
The vehicle, imported under Buyanga’s Zimbabwe-registered company, Auto Haus Car Hire, was auctioned in May along other high-end vehicles owned by alleged South African mafia boss, Radovan Krejcir, and ex-strip tease joint-operator, Lolly Jackson.
But if South African authorities thought they had Buyanga figured, the same Rolls has turned up in Zimbabwe, eventually, with Buyanga as the registered owner.
The vehicle had been locked up at the Sunnyside Police Station in Pretoria since it was impounded in 2010.
Buyanga says in court documents his car was “hijacked” by police.
South African police, at the time, claimed the vehicle was part of an ongoing investigation. They suspected it was stolen, but it was later proved that Buyanga indeed owned the vehicle.
Police in Hampshire, England, where Buyanga bought the car, said in documents submitted in court that the vehicle was never part of any of their investigations, nor was it suspected to be stolen.
Buyanga submitted ownership papers, but the South Gauteng High Court dismissed his application on a technicality.
The businessman, speaking by telephone from Harare, refused to discuss how he had reclaimed his Rolls on Saturday, referring questions to his South Africa lawyer, Engelbertus Grove, who was unreachable.
In a 2014 court fight to have the car restored to Buyanga, Grove said SARS did not provide Buyanga with “sufficient reasons why it refuses to accept the evidence presented”, adding that a slew of documents from Deca Motors International Limited (Deca) and Ian Frank Properties’ agency role proved “prima facie ownership, as no evidence to the contrary was produced”.
“Despite the allegations of a so-called police investigation since 2010, no evidence was presented to counteract the evidence… regarding the applicant’s claim of ownership of the vehicle,” he argued.
Buyanga has been seen driving the Rolls in Harare. The car, which joins an expensive garage which already boasts two Lamborghinis and a Ferrari, is usually parked at Cell Funeral Assurance at Sabi House on Park Street in Harare.Advertisement