BUSINESSMAN Frank Buyanga is seeking President Emmerson Mnangagwa’s intervention in his escalating battle with Police Commissioner General Godwin Matanga he also wants suspended for peddling falsehoods that he was a fugitive.

Buyanga took exception to Matanga stating in an affidavit that the businessman is a fugitive after the police allegedly failed to locate him in order to enforce a court order.

He has been at the centre of a nasty custody battle with his ex-lover Chantel Muteswa and was last month was ordered to return the child its mother.

Buyanga appealed the ruling asking the court to stay the execution of an order by Justice Jacob Manzunzu compelling him to return the child.

At the appeal hearing, Matanga deposed an affidavit claiming the Zimbabwe Republic Police had engaged International Police to try and locate Buyanga and the minor.

Matanga said at the time: “The investigations are still continuing and are at an advanced stage. Interpol has been invoked to assist in locating both the Applicant and minor child outside this jurisdiction. It will be an affront for this Honorable Court to entertain a fugitive from justice like the Applicant.”

Now, in a Buyanga letter to Mnangagwa dated May 7, 2020, Buyanga said the allegation has impugned on his reputation.

He wrote that all his previous complaints to the police against his Muteswa have been ignored.

Buyanga goes on to tell the president that he had even written to the Zimbabwe Anti-Corruption Commission and the Judicial Services Commission to report wrongdoing by police.

Ironically, some of the complaints by Buyanga to these bodies cite the president’s son, Collins, as one of the alleged perpetrators of corruption.

Collins is alleged to be now dating Muteswa.

“Those utterances (calling Buyanga fugitive) have spiralled in the public domain, with the Herald carrying such a story on the 1st of May 2020 and various other publications followed suit,” writes Buyanga to Mnangagwa.

He continued: “Your excellency, I am a man of integrity who cannot afford to be a fugitive especially over an issue involving my son.

“I believe my son deserves the best whilst I live, whether with me or his mother and I am doing the best I can for him. He has been staying under my care for over seven months (from July 1, 2019) till he was unlawfully removed from my custody, against a court order with the assistance of the Zimbabwe Republic Police and the messenger of court. Again, I complained about this and nothing was done about my complaint.”

Buyanga pleads with President Mnangagwa saying he does “not in any way wish to direct your thinking.”

“Your Excellency, as an affected citizen, I hereby formally register my displeasure at Mr. Matanga’s behaviour with an utter disregard for the rule of law. As I have said in the past decade in various communications, there is very little chance that Zimbabwe will see meaningful development if there is no effort to enforce the rule of law.”

This is not the first time Buyanga has clashed with a serving police chief.

The businessman once took on the then powerful head of police, Augustine Chihuri, accusing him of abusing his authority.

Buyanga said he believed the former top cop was “a disgrace to law enforcement and should be punished for his regressions.”

In 2018, Buyanga demanded that Chihuri be arrested and be punished for alleged shenanigans that took place when he was police commander.

“I’ve evidence that I’ve written three letters to the Commissioner-General of Police, Augustine Chihuri. I have even visited him at his offices, but he refused to see me. I left my contact details and stated why I was seeking a meeting with him, but there was no response,” complained Buyanga at the time.

Chihuri was retired by President Mnangagwa after two decades at the helm of Zimbabwe police service.

Meanwhile, in the same letter, Buyanga also complained that there seemed to be a direct confrontation on his person by Mnangagwa’s government which deliberately fails to acknowledge his contribution towards fighting Covid-19 in Zimbabwe.

“On another note your Excellency, I made donations towards procurement of various items in the fight against the deadly Coronavirus. Some funds were channelled to the disaster relief fund CBZ account but no acknowledgement to my companies has been made by the government regarding such donations,” he said adding that the donations were not for publicity.

He said a mere acknowledgement by the relevant offices would do for accountability purposes. 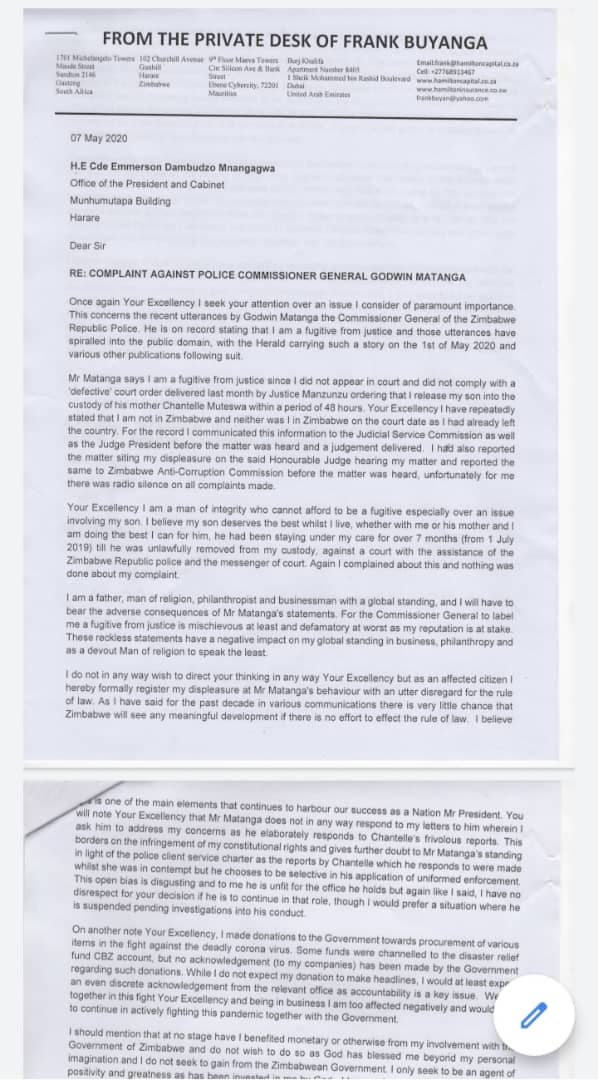 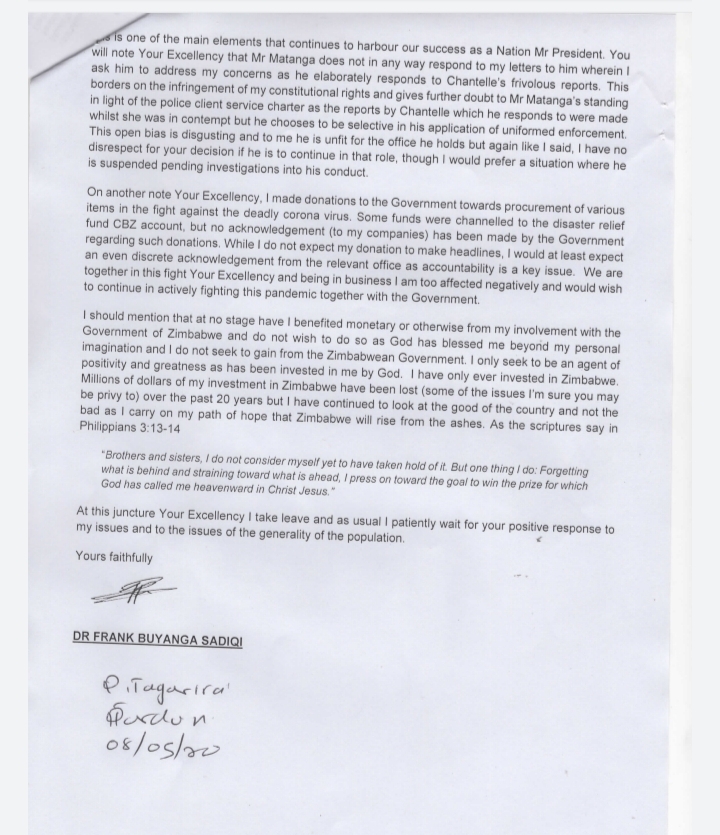