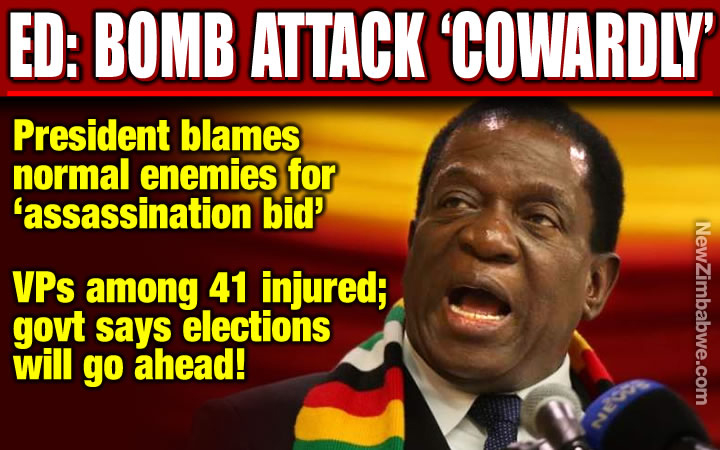 By Associated Press and Own Staff

HARARE:President Emmerson Mnangagwa was unscathed Saturday by an explosion at his Bulawayo campaign rally that state media called an attempt to assassinate him, later visiting his two injured vice presidents and declaring the “cowardly act” will not disrupt next month’s historic elections.

Dramatic footage showed a smiling Mnangagwa walking off the stage and into a crowded tent where the blast occurred seconds later, sending up smoke as people screamed and ran for cover.

Officials said Mnangagwa was whisked from the stadium rally to a nearby government building in Bulawayo, a traditional opposition stronghold.

The explosion went off a “few inches away from me, but it is not my time,” the president told state broadcaster ZBC. Mnangagwa, who has joked openly about multiple attempts on his life in the past, said he was used to them by now.

Dozens of people were injured, the state media reported. Vice President Kembo Mohadi had leg injuries, while Constantino Chiwenga, a second vice president and the former military commander, had bruises on his face, the report said. Most of the injured were discharged from a hospital after treatment, presidential spokesman George Charamba told the newspaper.

The blast and the lack of clarity about who was behind it injected new uncertainty into preparations for the July 30 elections, the first since longtime leader Robert Mugabe stepped down in November after a military takeover.

Mnangagwa, who had been fired as Mugabe’s deputy in a ruling party feud shortly before the power transition, took over with pledges to deliver free and fair elections.

Mnangagwa said on Twitter that he was awaiting further information about the blast but added, without elaborating, that those responsible must have come from “outside Bulawayo.” He added: “I can assure you these are my normal enemies.”

“It’s not the first attempt of my life. It does not scare me, I’m used to it. Six times my office has been broken into; cyanide was put in my offices so many times. I will continue.

“When they tried to poison me I survived, they tried poisoning me through my office, I survived. The same methods, I survived… It exploded inches away from me but it is not my time…”

He had fled Zimbabwe shortly after his firing in November by Mugabe, who along with his wife, Grace, had sharply criticized the man who had been his closest confidant for many years.

Later Saturday evening, the Zanu PF leader appealed to the nation for unity.

“The campaign has been conducted in a free and peaceful environment, and we will not allow this cowardly act to get in our way as we move towards elections,” he said.

Main opposition leader, Nelson Chamisa, said on Twitter: “Our prayers go out to the injured and we hope no lives have been lost. Violence must have no place in our politics. ”

Former finance minister and MDC Alliance principal Tendai Biti added; “Our thoughts and prayers are with all that have been injured and hurt in this tragedy . No matter our differences violence now or in the past should have no room in our discourse & should be condemned unreservedly.”

The United States and Britain were among countries that condemned the explosion. The U.S. Embassy said on Twitter that “political violence in any form is unacceptable” and contrary to the progress needed to move Zimbabwe forward and “take its place on the global stage.”

The blast came just hours after a similar attack in Ethiopia, where a grenade explosion killed at least one person and injured scores just after the new, reformist prime minister addressed a huge rally in the capital.