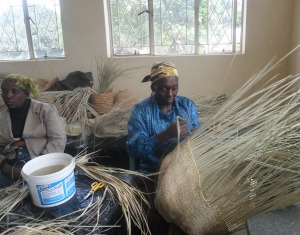 THE Bulawayo Home Industries and five other wearing communities throughout Zimbabwe have been selected to participate in an all-inclusive visual arts, design and crafts exhibition set for 29 January this year.
The exhibition is being organised by members of the European Union National Institutes (EUNIC) Zimbabwe Cluster in collaboration with the National Gallery of Zimbabwe.
It will also feature new commissions by international artistes such as Ifeoma Anyaeji from Nigeria, Alexandra Bircken from Germany, Delaine Le Bas from the United Kingdom and designer Matali Crasset from France.
The EUNIC Zimbabwe Cluster includes the British Council, Alliance Francaise and Goethe Institute.
Acting Regional Director for the Bulawayo National Gallery Clifford Zulu said the international artistes and designers have decided to collaborate with weaving communities as part of the exhibition which has been dubbed “the basket case 11.”
Other weaving communities which will be showcasing their wares include Binga based Craft Centre, Lupane Women’s Centre, Masvingo based Zenzele Foundation and STEP Trust in Honde valley.
“The purpose of this exhibition is basically to interrogate the basket as an object encapsulating notions of container as well as looking at weaving both as a technical and conceptual process,” said Zulu.
“The resulting art works and objects are multidisciplinary and blend Zimbabwean regional weaving traditions, knowledge and skills with contemporary art and design. While each of the pieces embraces weaving as a common artistic language, they also bear the distinctive mark of each participant,” added Zulu.
Judith Ncube, the Craft production officer at  the Bulawayo Home Industries , a Mzilikazi based Bulawayo city council run women craft centre said the exhibition will afford  the centre the opportunity to interact and share ideas with other international artistes and weavers from other areas.
“We are excited to take part in this exhibition. We hope to share notes and ideas especially on the new trends in the world of craft making. Most importantly, we also hope to clinch lucrative market deals during the duration of the exhibition,” said Ncube in an Interview with NewZimbabwe.com.
Basket Case 11 is curated by Christine Eyene, Guild Research Fellow in Contemporary Art, University of Central Lancashire and Raphael Chikukwa, the Chief Curator of the National Gallery of Zimbabwe.Advertisement