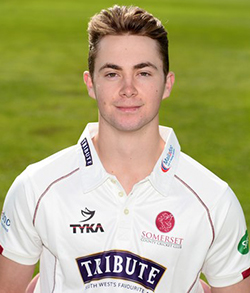 ONLY 13 overs were played on a soggy second day of Hampshire and Somerset’s Division One Specsavers County Championship clash at the Ageas Bowl.
In the 54 minutes of action, Gareth Berg managed to find Hampshire’s first wicket of the match. The South African fast bowler dupe Marcus Trescothick into a cut shot which proved too close to cut as he chopped onto his own stumps.
Where Trescothick failed, his younger less experienced, opening partner Eddie Byrom appeared to flourish. The Zimbabwean, on his first class debut, looked comfortable at the crease as the new pink ball sprung off the pitch.
But his 50-ball progress at the crease was paused by rain, with the 20-year-old reaching 13 not out before umpires Ian Blackwell and Martin Saggers eventually called off any hope of any further action at 6.30pm.
It was scant reward – initially at least – for Byrom’s father who had grabbed the first plane he could from Zimbabwe to see his son’s first-class debut.
“When I found out I was playing I immediately called my parents and told them,” Byrom said. “My dad really wanted to be here so flew over to support.
“Since I was small it was a massive dream of mine to play first class cricket so it was amazing to make that dream come true. I moved over the England three years ago to finish my schooling at King’s College in Taunton and then my cricket flourished from there, being involved with Somerset and the second team in the last couple of years.
“Steve Snell, the second team coach, has been great for me and being able to learn off the likes of Marcus Trescothick is amazing for me. It was young and old – there was about 20 years difference between us! “He is such a calming influence so when I was walking out with him was exactly what I needed on my debut.”Advertisement