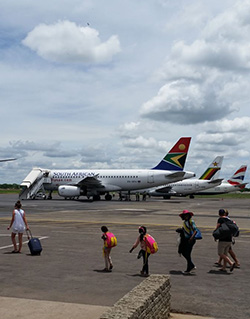 THE Civil Aviation Authority of Zimbabwe (CAAZ) is struggling to attract new airlines to its new look Victoria Falls International Airport because of poor traffic to the tourism hotspot, an official has said.
CAAZ initiated the $150 million Chinese-funded facelift in February 2013 to boost its aircraft handling capacity and tourism in Victoria Falls.
A marketing team from CAAZ met business community in the resort town on Tuesday to ask for collaboration in marketing the facility to attract more airlines and tourists.
Marketing manager, Sarudzai Muza told the business community that airlines were concerned about low traffic into Victoria Falls.
“Airlines are saying the available traffic does not allow bringing flights to Victoria Falls. We need to work on improving our traffic,” she said.
“We are making follow ups to airlines that attended last year’s Routes Africa and if they come, we want more passengers to sustain them so that they don’t pull out,” she said.
Muza said CAAZ was looking for collaborations with tour operators and the business community to lure more airlines and improve traffic.

Airport facelift
Currently, five airlines – Air Zimbabwe, Com Air, Air Namibia, South African Airways and low cost Fly Africa use the Victoria Falls airport.
The facelift includes a new 4km runway, expansion of the existing runway, construction of a new terminal building, and road network and car park.
The new runway will be able to accommodate wide-body aircraft, such as Airbus A340, Boeing 777 and Boeing 747.
A new fire station and control tower are also being built at the airport.
The expansion work is being carried out by China Jiangsu and funded by China Exim Bank. The new facility will handle more than one million passengers annually up from the current 500,000.
Taxi ways will be built on the existing runway, which will be closed for upgrading as soon as the new stretch is complete.
On the terminal building and new runway, workmen are doing final touches, CAAZ officials said.Advertisement