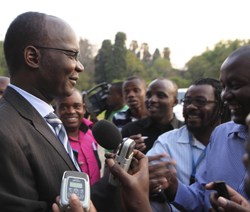 ON SATURDAY, the MDC organising secretary Nelson Chamisa, who turned 35 this year, will be the master of ceremonies at Sakubva Stadium in Mutare where the people’s party will be holding its 14th anniversary celebrations.
This week, Emmerson Mnagngagwa and Sydney Sekeramayi are part of the Cabinet team President Robert Mugabe reappointed for the umpteenth time and by the time their term ends in 2018, they would have served a total of 38 years as members of Mugabe’s Cabinet.
Talk of career Cabinet Ministers!
They have been in Cabinet for almost the same time young Nelson Chamisa has lived on this earth!
Mugabe’s latest Cabinet is just a big joke, to say the least.If Zimbabweans and the world at large have been waiting for the new Cabinet to get the message of the policy direction Zanu PF wants to take this time around, everyone has been disappointed.It’s more of the same!
Mugabe has simply taken the country forward to yesterday! With an average age of around 60 years, it would be unfair for the Facebook generation of this brave 21st century to expect salvation from this lot. The youth and the women largely remain by-standers while Mugabe and his old guard take the mantle of both the party and the country.
It is a Cabinet which does not inspire any confidence at all. It ranges in irony from a Minister of Information more known as a media hangman for his closure of independent newspapers to a Deputy Minister of Information who owns an “independent” and “privately-owned” radio station in the country.
We now have full-fledged ministries to deal with “courier services”, “climate” and “psychomotor” activities when these could at best have been departments in other ministries. How ridiculous can we get?
The prospects remain bleak for my beloved media fraternity. Ten years ago, when I was the secretary general of the Zimbabwe Union of Journalists, I was taking Professor Jonathan Moyo to court over the unconstitutional provisions of AIPPA. And he still disagrees with SADC and the rest of us that this is an area where reform is necessary. We are back to square one.
For our sins, we could see the return of PaxAfro by next week and 1,000 percent local content in all our media by tomorrow to mark the second coming of the good Professor! The of the return of this doyen of hate speech is certainly no good news to an industry expecting media reform and the full implementation of the provisions of the new Constitution in relation to information access and the role of the State media.Advertisement

The new Minister of Energy, Dzikamai Mavhaire, is old, tired and weary to the extent that he needs the energy himself first before he gives it to the rest of the nation.
Josaya Hungwe (responsible for Psychomotor activities) is just another joke!
There is basically no new person among the Cabinet Ministers, only a sprinkling of new faces among the deputies. More like rearranging the chairs of the Titanic in the hope of changing its fate!
Lazarus Dokora, Hungwe, Mavhaire, Paddy Zhanda etc give one the impression that this is more about providing a lifeline to expired cadres than anything else. If ever there was need for any evidence that this party, and the country is finished, this is it.
The old man simply wants to take his party, and unfortunately the country, to his grave. Only two ministers have apparently been demoted – Saviour Kasukuwere , now Minister of Water, Environment and Climate and Obert Mpofu, the Minister of Transport.
If one looks at recycled material such as Joseph Made, Ignatius Chombo, Simbarashe Mumbengegwi, Kembo Mohadi and Emmerson Mnagagwa, one gets the confirmation that the President is taking too far the gospel of the green revolution; of recycling as being good for the environment!
This is simply a party of yesterday people that wants to lead us today, tomorrow and the day after.
As for Webster Shamu, the newly-appointed Minister of Information Communication Technology, I am not even sure if he can use an iPad.
Then there is the apparently laughable plot to dilute the MDC’s influence in the two metropolitan provinces of Harare and Bulawayo by appointing Ministers of State for Provincial Affairs, whatever that is.
Zanu PF does not believe in the new Constitution, particularly the issue of devolving power to the provinces. That is why they have recentralised by appointing these Ministers of Provincial Affairs. This is a major statement against the Constitution and we all have to prepare for more attacks on the people’s charter that we regarded as a revolution.
In the battle of the factions, it appears the faction that was behind the theft and violence in 2008 and the grand theft in 2013 has benefitted handsomely, if one looks at the figures who have landed a sizable handful of the influential posts.
From the Speaker of Parliament to the Finance Minister and the Minister who will do the spin, the survivors of Dinyane appear to be very much still with us! Indeed, they have survived to fight another day.
As for the influential Mines Ministry, we have chosen to take it to Zvimba. We cannot gamble with such a key Ministry and so we have decided to take it to our village in Zvimba by giving the portfolio to our close relative, Walter Chidhakwa.
It remains a Cabinet of archaic minds that could still return to Chinhoyi in the belief that pure diesel can ooze out of a rock. A quick glance at the picture combo of those who solicited help from the diesel n’anga will show that the characters who went to Chinhoyi remain in Cabinet.
In this brave 21st century, we have Cabinet Ministers who go to a sangoma with the sanction of the full Cabinet in the belief that Zimbabweans can end up getting their fuel from a rock!
Well, this must have been the original meaning of the word Cabinet – something made of (dead?) wood!
Luke Tamborinyoka is the spokesperson to MDC President Morgan Tsvangirai. He writes in his personal capacity. He can be contacted at mhofult@yahoo.com