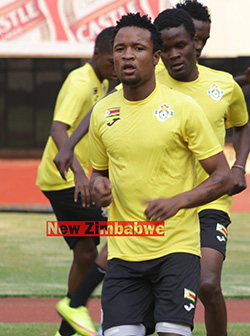 THE Confederation of African Football (CAF) has reshuffled the referees who were scheduled to officiate in the 2017 Africa Cup of Nations qualifier match between Zimbabwe and Guinea at Rufaro on Sunday.
The soccer continental body said in a statement the decision to reshuffle the match officials was “technical”.
Meshack Medupi from Botswana who was initially appointed as the first assistant referee was replaced by a fellow country man Bakwena Simankalele.
Caf confirmed the changes in a letter to Zifa.
“We would like to inform you that due to technical reasons, it was decided to replace Mr. Mesack MEDUPI (Botswana) the initially designated [Assistant referee 1] of the said match by Bakwena SIMANKALELE (Botswana) [Assistant Referee 1],” wrote Caf.
The referees are expected in Harare on Saturday.

Meanwhile, the Warriors starts said they were ready for the West Africans.
“I feel like it is my first time representing my national team,” said striker Nyasha Mushekwi.
“But it is also exciting coming back to play in front of not only my CAPS United fans, but in front of the Zimbabwean football fans.
“So, it is going to be a big challenge for us because Guinea are not a small team, they are not a small country but we just have to pull our weight and see how it is going to go.”
He added: “I know we have a good team around us, a lot of young players, it’s exciting.
“Everybody is ready to work. It is a big game on Sunday so we just have to push and look for a positive result.
“God has been looking after me and I hope the form that I have been showing that side (in Europe) can also be seen when I play for the national team.”