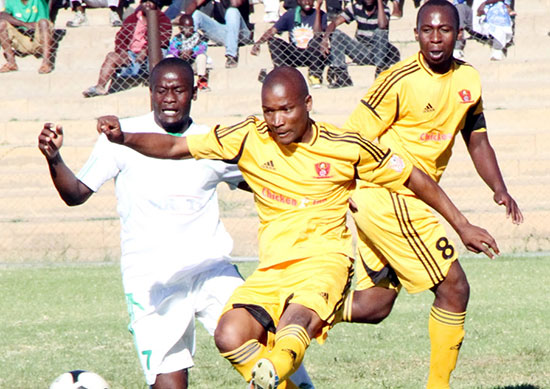 ZIMBABWE Champions Chicken Inn were, Monday, fined $5000,00 by the Confederation of African Football (Caf) for the offensive behaviour of their players.
The transgression was committed during the local side’s African Champions League second leg tie against South African giants Mamelodi Sundowns at Lucas Moripe Stadium in Pretoria in February.
Chicken Inn beat their more illustrious opponents 1-0 in the first leg in Bulawayo through a strike by Mitchell Katsvairo.
However, they were knocked out of the tournament following a 2-0 defeat in the second leg in South Africa which saw Mamelodi Sundowns advancing on a 2-1 aggregate victory.
The two goals came from Wayne Arendse and Katlego Mashego who converted a disputed penalty at the death after Passmore Bernard was adjudged by Madagascar referee Andofetra Avombitara Rakotojaona to have clipped Khama Billiat in the penalty area.
Chicken Inn players then protested against the penalty decision, an unsporting behaviour which has landed them the fine.
Caf on Monday, announced the penalty against Chicken Inn on their website. Chicken Inn chairman Lifa Ncube could not be reached for comment.
The Bulawayo side was making their maiden appearance at the prestigious tournament after winning the league title last term when they beat Dynamos to the finishing line under coach Joey Antipas.