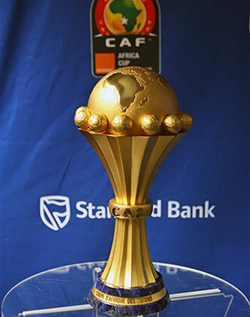 MOROCCO have been given until the weekend to decide whether they want to host next year’s African Nations Cup finals after the Confederation of African Football refused to consider a postponement of its showpiece tournament over Ebola virus fears.
Morocco must make clear its position by Saturday, said African football’s governing body (CAF) after a meeting in Rabat on Monday between prime minister Abdelilah Benkirane and a delegation led by CAF president Issa Hayatou.
Morocco want the tournament postponed to June next year or January 2016 because of fears of the possible spread of the Ebola virus, which has caused almost 5,000 deaths in West Africa.
But CAF stood firm on its determination not to change the schedule dates of Jan. 17-Feb. 8 despite the fact it now runs the risk of having no host for the 2015 finals.
But it did open the door for any other country interested in stepping in as emergency hosts, saying they also had until Saturday to decide.
There have been no public expressions of interest from the small handful of African countries with the requisite infra-structure and organisational ability to step in at the last minute.
CAF set out its argument against a change of dates, effectively accusing Morocco of alarmism following last month’s request from its sports ministry for a postponement on the back of advice from its health ministry that there was a risk the tournament could bring the deadly virus into the north African kingdom.
CAF rejected the notion in a lengthy statement on Monday, setting out reasons why it felt the tournament could go ahead in Morocco as planned.
“Of the three countries where the epidemic is prevalent, only Guinea retains a chance of qualifying for the final tournament.
“In addition, Guinea hosts its home games in Casablanca and has adhered to a strict health protocol implemented by Morocco that has so far showed no flaws,” CAF pointed out.
“Morocco, a country where no cases of Ebola have been identified, welcomes in the coming weeks and a few days before the (Nations Cup), the Club World Cup where there will be participants from a country where a case of the Ebola virus has been identified (Spain).
“The number of foreign fans expected in the stadiums for the Club World Cup 2014 is much higher than the ones expected for the Nations Cup.Advertisement

“Indeed, almost all of the fans attending the Nations Cup are residents of Morocco, and considering the average purchasing power in most African countries, it is unrealistic to expect more than 1,000 supporters from the rest of continent to attend the (tournament), except for those who benefit from a geographic proximity within the Maghreb region.
“CAF considers that the current health system in place in Morocco, and whose effectiveness has been proven, is more than able to cope with the very limited flow of people for the Nations Cup,” its statement added.
CAF also said it had strictly adhered to World Health Organization directives, banning three countries from hosting preliminary matches, and that no transmission of the Ebola virus had been reported “in connection with a football match”.
It also said an expansive schedule did not permit it to change dates.
Morocco last held the tournament in 1988 and won it in 1976 when it was staged in Ethiopia.