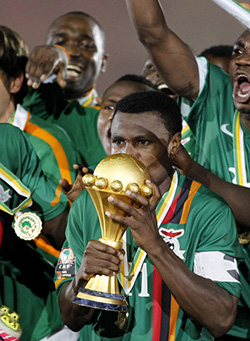 THE Confederation of African Football (CAF) has sounded out other countries about hosting the 2015 African Nations Cup after Morocco asked for the tournament to be postponed due to the Ebola epidemic in West Africa.
Enquiries to CAF on Thursday as to who they had canvassed elicited no response, but South Africa and Ghana are known to have been approached.
The governing body asked the South African Football Association (SAFA) in a letter dated Oct. 12 whether the country would be willing to take over the hosting of the event should Morocco’s stance remain the same.
The Ghana Football Association (GFA) have confirmed they have received the same letter, along with other unnamed countries.
Morocco have asked that the Jan. 17–Feb. 8 tournament be postponed to 2016 overs fears that travelling supporters could put the country at greater risk from the Ebola epidemic.
CAF have made clear they have no intention of agreeing to Morocco’s request to postpone the event, in effect handing an ultimatum to the north African country to toe the line or give up their hosting rights.
A delegation headed by president Issa Hayatou is scheduled to arrive in Morocco on Nov. 3.
“The CAF president will lead a delegation that will proceed to Morocco on Nov. 3 in order to meet the Moroccan stakeholders and confirm CAF’s position,” said the letter to SAFA from CAF secretary general Hicham El Amrani.
“In case Morocco refuses to maintain the staging of the competition at the agreed dates mentioned above, CAF would like to know whether your federation would be willing and able, with the agreement of your authorities, to organise the 30th edition of the African Cup of Nations 2015.
“Kindly note this letter is also sent to some other federations capable of staging the 2015 edition of the event.
“In case CAF received two or more positive responses, a draw will be made by the Executive Committee to designate the host of the 2015 edition in replacement of Morocco.”
CAF said the possibility would arise “only if Morocco refuses to maintain the dates of the tournament currently agreed”.
CAF have still to confirm who will host the 2017 edition of the African Nations Cup after Libya were stripped of their hosting rights due to civil unrest in the country.Advertisement