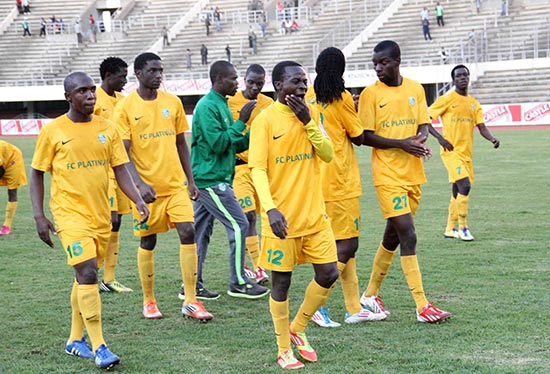 CONFEDERATION of African Football (CAF) representatives are expected in the country before the end of the year to inspect Mandava Stadium as well as accommodation facilities in Zvishavane ahead of FC Platinum’s participation in the Confederation Cup next year.
FC Platinum will be Zimbabwe’s only representative in the Caf inter-club competitions next year after winning the Chibuku Super Cup while Premiership champions Dynamos pulled out due to lack of finances.
The draw for Confederation Cup will be conducted on December 30.
Zifa spokesman Xolisani Gwesela, who recently returned from a CAF media officers’ workshop in Cameroon, said a decision would be made after the inspection whether Zvishavane can host the Caf games.
“As per norm, Caf inspectors will look at all the facilities available in Zvishavane and give a decision on whether the town can host or not.
“It’s the procedure for all participants and we do hope that Zvishavane will pass the test and fans there can enjoy football at the highest level,” he said.
In 2012, Platinum were forced to play their second round, first leg match against El Merreikh of Sudan at Rufaro Stadium in Harare due to lack of accommodation in Zvishavane as Caf requires at least a three star hotel.
In the first round, Platinum had hosted Green Mamba, but the Swaziland team stayed in Masvingo, 95km from the match venue Mandava. However, El Merreikh refused the same arrangement and flew straight to Harare from Khartoum.
Any team that will be hosted by Platinum would have to fly direct to Joshua Mqabuko Nkomo International Airport in Bulawayo, which is 170 km away from Zvishavane, and then make the road trip to the Midlands town.
This, according to Caf, is permissible, as only for distances of 200km and above are teams required to fly to the match venue.
In terms of accommodation, Zvishavane now has the three-star Pote Hill Hotel which has 46 rooms, five executive rooms, all with en-suite and internet facilities, in addition to extras like a bar and swimming pool.
FC Platinum president George Mawere says they are hopeful they will be allowed to host teams in Zvishavane.
“In terms of the stadium, it’s really not an issue because we have one of the best in the country and now we have a three star hotel.Advertisement

“But we will hear from Caf whether we have passed the test or not. We hope, for the sake of our fans, we will be allowed to host teams here,” Mawere told NewZimbabwe.com.