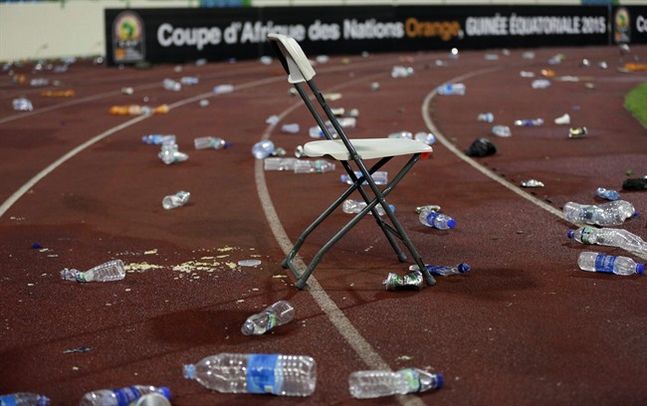 AFRICA’s football body is under pressure to heavily punish the country that stepped in to save its showpiece tournament after crowd violence marred Equatorial Guinea’s exit in the Cup of Nations semi-finals.
However, the third-place game involving Equatorial Guinea and Congo on Saturday at the same stadium in Malabo where the violence took place on Thursday will still go ahead, the Confederation of African Football said.
Equatorial Guinea fans threw rocks, bottles, and other missiles at Ghanaian supporters, players, and officials, causing the semi-final to be stopped for over 30 minutes in the second half with Ghana leading 3-0 and the home team on its way out.
Riot police fired tear gas at the angry home crowd, and evacuated Ghana’s fans to protect them, and a helicopter hovered low over the stands at Malabo Stadium, trying to restore order. The troubles were highly embarrassing for Africa’s top soccer tournament, local organizers, and CAF, all of which were under scrutiny after the tournament’s last-minute change of host country.
Ghana’s football association described the scenes as a “war zone,” as its fans came under attack from missiles, forcing some to seek sanctuary on the field behind one of the goals during the game.
Ghana players also had to be shielded by riot police when they left the field at halftime as missiles rained down on them.
A British reporter posted pictures on social media of large jagged pieces of glass, broken plates, and rocks, which he said he found on the field after the chaos.
CAF had already fined Equatorial Guinea’s federation $5,000 and warned it to control its fans after crowd trouble in its quarterfinal, a contentious 2-1 win over Tunisia at Bata.
CAF spokesman Junior Binyam told The Associated Press on Friday that the third-place game was “not in danger” of being called off.
But CAF met early Friday and would announce any disciplinary decisions and give details of injuries from the crowd trouble in a statement after lunch local time, Binyam said. He didn’t give details of the meeting or any decisions taken by CAF.
Some Ghana fans suffered minor injuries in the stadium from being hit by objects, while there were reports that local fans attacked the Ghanaians again when they were leaving the stadium.Advertisement

The African Cup had been running relatively smoothly until Equatorial Guinea’s quarterfinal.
Morocco conceded its hosting rights because of fears over the spread of Ebola, forcing CAF to approach Equatorial Guinea just two months ahead of kick off.