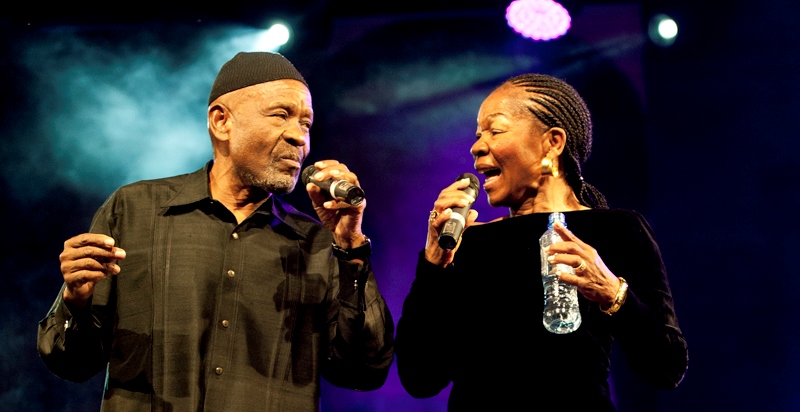 Johannesburg – After five decades of marriage, Letta and Caiphus Semenya are a model couple in an industry where romance is fickle. The couple laugh, tease and interject like young lovers.

As we begin our conversation, Mam “Soweto is my home, one I fondly love and have dear memories of, but many people don’t know that I was born in Umzinto [KwaZulu-Natal].”

For Letta, music was simply something people did at home, not a career option. “I didn’t think I would make a career of it until I met James Mabena, who discovered me and decided that I should join his group, The Swanky Sports, at the age of 13,” she says.

That brought her into contact with performing artists such as Miriam Makeba, Dorothy Masuka, Thandi Klaasen and others, and her career path was sealed.

Alexandra-born Caiphus (79) never thought it would be his career choice either, but growing up around the likes of Zakes Nkosi, penny whistle bands and the township’s plethora of talent decided him. “When I was nine years old, an old man, Oom Piet, would come [to our home] in the evenings. He would compose his own songs and [apply] the wrong lyrics. I only discovered this when I was older,” he laughs.

Caiphus and his friends would perform during school breaks.“There was a guy, Bra Vivian, who heard we were doing this. He got me and my friends into a band and gave us parts to sing. He would play the songs andwrite the lyrics. We outgrew this phase but stuck together as a group.”

The Semenyas say their dogged “resistanceand determination to thrive against the odds” was key to their being able to overcome the obstacles that apartheid placed in the way of black South Africans – including the imposition of after-dark pass-law curfews in so-called white areas.

“I don’t think apartheid influenced our dreams. When we discovered we had something to offer, we decided to go for it, and we didn’t let anything stop us,” says Letta, who was jailed at age 14 for still being in the Johannesburg CBD after a performance which had ended after the curfew.

Defying curfews was par for the course, say the couple.

“We had this thing that was propelling us. I can’t explain it in any other way. It was difficult, but we went anyway.”

Caiphus says that for a black person to dream further than being a “gardener or ‘tea boy’, and for the women, a nurse, domestic worker or teacher” was “not supposed to happen”.

“But the bug had already bitten and we were inspired by the older generations.”

Says Letta: “Black men in South Africa never enjoyed looking at the sun and saying ‘Wow, the sun is so beautiful.’ They never had that opportunity … they had to make sure that the pass is there. But we were put here to do this, to expose this holocaust that was happening.”

The 1950s spawned artists who became local and global icons for decades – and are still going strong.

“Even under the most strenuous conditions we found ourselves in as a people in the ’50s, it just exploded. This was when the ANC was at its peak. This was where you found [PAC leader Robert] Sobukwe. People with great brains. It was happening … which now it’s not,” says Caiphus.

“It was not just the music but also the politics and the journalists. It was happening; creativity in all spheres. Some of the most dynamic teachers happened in the ’50s. There were principals who were very famous for being incredible teachers. There was something in the air; the whole society was on the move. There was a defiant spirit in everybody.

“The women used to dress up. Teenagers looked great – not like nowadays. They had pride. It’s something I wish could come back; that spirit.”

“Oh, it was fabulous!” Letta adds.

On leaving South Africa in 1965, Caiphus and Letta were welcomed into exile by the South African music community, including Makeba, who were quickly gaining traction in Hollywood. Some of the artists they worked with – such as Harry Belafonte and Quincy Jones – became lifelong friends. Caiphus participated in the creation of soundtracks for the made-for-TV epic US miniseries, Roots, as well as for The Lion King and The Color Purple.

“There are a lot of memories [I have] of working with a lot of wonderful people,” says Caiphus, who stresses how important the camaraderie with his fellow South African musicians was. “We all met in the 1950s. Hugh [Masekela], Miriam and all of us from South Africa who became global artists. We grew to be friends and so, when we went overseas, we continued being friends.”

A memorable moment for the couple was sitting in their US apartment with a bottle of wine, watching Nelson Mandela’s release from prison on TV.

“We were so excited. It was a very emotional day and he looked so good with grey hair. And when we saw Winnie beside him, we said: ‘Girl, yeah you did it!’ Because she worked. She worked for that man,” Letta says.

Caiphus and Letta are still wowing the crowds but are also working hard on legacy projects – including setting up a hall of fame museum showing the legacy of their peers and forebears. “We are just the leaves from the tree,” they say.

“Some of our young people still need to find their own sound. They should stop trying to sing like Americans. They should go deeper into themselves … and find [their] own soul,” says Letta.

Some of their favourite performers are Lira, Ringo, ThandiswaMazwai, Siphokazi and Nathi Mankayi.

Their story would be incomplete without a retelling of how their relationship began.

“Ah, you guys don’t get tired of this story,” Letta protests, telling Caiphus: “You tell them how we met.”

Letta recalls how he offered her a bite of his apple on a train. He interjects: “I was merely playing. We were on a train from Johannesburg to Cape Town when me and my friend passed her and, I think, Abigail [Kubeka]. I jokingly asked if she wanted a bite from my apple. She said yes. I told her: ‘Catch it.’ I threw it at her and she caught it and bit from the same place that I had.”

“For us it really seemed like nothing at the time, but now when we tell the story, it really amazes us.”