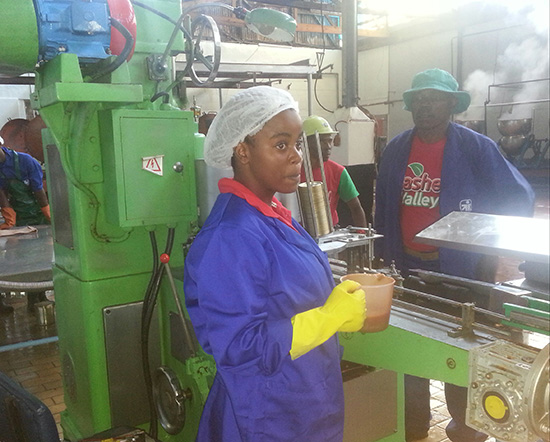 MUTARE: Cairns Foods which was under Judicial management for three years from November 2012 to October 2015 is coming back on its feet following the commissioning of a new plant at its local Mutare branch.
The new plant which was acquired at a total cost of $257,000 from China has a capacity to produce 105,000 tins of Cashel Valley Baked Beans per day (3,168,000 units per months).
This means the company will require 3,000 tonnes of dry beans which will cover a total of 3,000 hectares. Close to 12,500 households in the Cashel Valley irrigation scheme in Chimanimani will benefit from the establishment of the new plant.
Speaking at commissioning of the last week, Industry minister Mike Bimha said Cairns was a manufacturing giant in the agro-processing industry, significantly contributing to the growth of the agricultural sector and the economy as whole.
“Post-dollarization period, Cairns ran into financial and non-financial difficulties and consequently, its capacity utilization plummeted to around seven percent in 2012 – a level less than the manufacturing sector average of 12 percent reported at that time,” said minister Bimha.
He said Cairns used to process 16,000 tonnes of various vegetables and fruits and contracted over 5,000 households as producers but post-dollarization, these figures had since fallen down to 6,000 tonnes and 1,500 households respectively.
“Various factors have played a significant role in stifling the growth of capacity utilisation. Chief among them is weak demand resulting from cheap imported products and the liquidity crunch which affected disposable incomes,” said Bimha.
The minister said it was pleasing that Cairns had shown some resilience at a time most companies had collapsed or scaled down operations.
“The company invested $1million into a snacks and water bottling plant in Harare and Marondera respectively,” said Bimha, adding that its capacity utilization has since increased from seven percent in 2012 to 15 percent while employment has also risen from 50 workers in 2012 to 150 as at December 2015.
Cairns Chief Executive Officer, Nancy Guzha, said contracted farmers would benefit through agronomy and inputs support and increased demand for their produce.
She said the company’s out-grower scheme is expected to benefit 800 farmers and contribute to supporting 1,100 households.Advertisement

Guzha said the company plans to raise capacity utilization from the current 15 percent to 80 percent by 2018.
“This will require 3,000 tonnes of dry beans, which in turn means 3,000 hectares of beans needed to be grown. More than 1,200 households will be positively impacted by the planned increase in capacity utilization,” said Guzha.