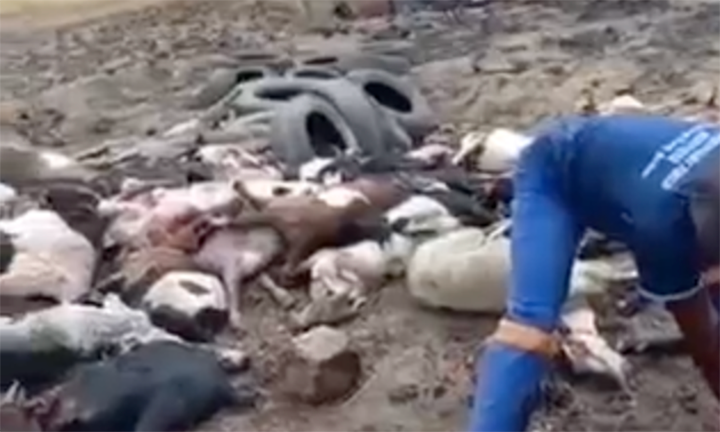 ZIMBABWE National Society for the Prevention of Cruelty to Animals (ZNSPCA) has condemned last week’s slaughter of 81 goats by veterinary officials for the purpose of creating social media content in Chegutu.

The goats, put down in “callous and barbaric” fashion, belonged to a man  who had been transporting them from Gokwe, before he was intercepted at a roadblock in Selous.

The Department of Veterinary Services then ordered the destruction of all the animals as Gokwe was a high-risk zone for foot and mouth disease.

The goats had police clearance only, but no veterinary movement permit and, therefore, in contravention of provisions of Animal Health (Movement of
animals) Regulation of 1984.

In a statement released at the weekend, ZNSPCA said it strongly condemned the killings by veterinary officials.

“We condemn in the strongest possible terms the cruel and inhumane slaughter of livestock that occurred in Chegutu on the 19th of October 2022 at the hands of personnel from the Division of Veterinary Field Services under the Department of Veterinary Services and witnessed by ZRP (Zimbabwe Republic Police) officials under the guise of enforcing laws on animal movement,” reads part of the statement.

The animal rights body said although it supports prevention of spread of diseases, it was against the inhumane slaughter of the goats.

“Whilst we are fully supportive of the need to enforce the provisions of Animal Health (Movement of Animals) Regulations 1984 to protect the nation from disease outbreaks such as Foot and Mouth, we cannot accept the barbaric manner in which 81 goats were slaughtered in what appears to have been a cruel and dramatised event for the purposes of creating social media content.

“The disturbing and graphic images captured on this video will no doubt be inadvertently viewed by children as well as persons of a sensitive disposition and could have lasting detrimental effects,” further reads the statement.

ZNSPCA highlighted that it was further concerned that individuals partaking in this barbaric and inhumane act were doing so as supposedly trained and qualified representatives of the Department of Veterinary Services.

If this was the case as it so appears it now brings into question the training and qualifications held by these persons in addition to their complete and total disregard for the various rules, regulations and laws of Zimbabwe that they have clearly violated.

“It is our ardent insistence that all persons representing the Department of Veterinary Services who were involved in this incident face full disciplinary measures and where applicable be prosecuted for their illegal and shocking conduct.

“Zimbabwe has always maintained exemplary standards in veterinary care and animal health, unfortunately these recent events have now raised many questions that will need answering by the profession,” ZNSPCA stated.