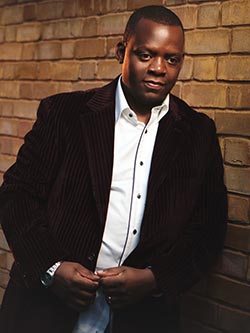 THEY burst onto the scene in 1998 with their cult classic ‘Tombofara’, which dominated the airwaves, stole top spot in the charts and pretty much became everyone’s favourite feel-good sing-along track akin to Pharrell Williams’ current global hit, ‘Happy’.
Calvin Gudu and Muzi Mangena, going by their stage name Calvin & Muzi, became a household act and were to pave the way for latter day soulful crooners such as Nox Guni and Trevor Dongo.
And now, 16 years after they released the original hit, the UK-based duo is back with a re-worked version of ‘Tombofara’ and a clutch of re-mixes of the song done in collaboration with some of Zimbabwe’s leading urban grooves producers.
This Saturday, the boys from Bulawayo will roll back the years and take to the stage to perform their re-worked hit song at the Zimbabwe Achievers Awards (ZAA) gala dinner to be held at the luxurious Royal Garden Hotel in Kensington, London.
Singer and producer Calvin has promised a scintillating performance to be delivered with the aid of an ensemble of polished musicians playing live backing music.
The former member of late 90’s group, Matonto, which mesmerised fans with songs like ‘Umendo’ and ‘Ncam Ncam’ has, in recent years, recorded gospel albums, ‘The Album’ and his latest, ‘Above All’.
But it is his reunion with childhood friend Muzi on the re-launch of ‘Tombofara’ that is set to awaken nostalgia among their fans and provoke demand for more offerings from the talented pair.
We caught up with Calvin for a quick chat about the ‘Tombofara’ project in-between his rehearsals for the ZAA performance.
Correspondent: Why do you think Tombofara has become such an enduring classic that so many people identify with, and why have you come up with new remixed versions?
Calvin: You know, ‘Tombofara’ is an unusual song. We never planned to write it or record it, never mind for it to be the success that it was. Back in 1998 Muzi called me on a Thursday and told me that he would be stopping by on that Friday night on his way home (Zimbabwe). Immediately, I thought we could do a song together, but I doubted we had ample time to write a full song and record it within such a short time, so I immediately started messing around in the studio.Advertisement

To my surprise the track just took me over and simply put, just wrote itself. The drums, the keys, the bass line, man, everything was just jellying together without much struggle. After that I had a theme of writing a fantasy story about a perfect situation with a perfect bride, (like my Mrs!)) So by the time Muzi stepped into the studio, I had the chorus all laid out. With Muzi we wrote and recorded the verses that night. Boom! The track Tombofara as people know it was born.
Although the credits of the song go to Muzi and I, in reality we find it difficult to really take full ownership of this song because it’s one of those songs that just happened, you know. Our view is that this song was God’s gift to the people of Zimbabwe, which simply came through us. We only have the custody of the people’s song. I guess people got that and naturally gravitated towards it and fully embraced it as theirs. We often joke with friends that we only received the people’s bread and simply distributed it as the trustees.
We haven’t really remixed ‘Tombofara’. We just re-worked it just to update it. We do, however, have some pretty dope remixes from other producers throwing in their interpretation of it. We are very excited about this project, but kind of nervous too because we are very careful not to temper with it unduly. But we’re pretty confident that our people will love the results.
Correspondent: Tell us about the new project from which the reworked Tombofara and the remixes come; what can your old as well as new fans expect?
Calvin: We have a five-track EP coming out simply entitled ‘Tombofara’. It will include the very original track, the rework and other modern remixes. With the original track, we are taking our faithful older people back down memory lane, whilst the re-work brings the new young listener on-board the Tombofara train, and various remixes cater for those with, shall we say, a trendy taste.
It’s all in the bag for everyone. For us it’s a way of say to our people ‘thank you’. Not just the fans but the promoters, DJs, TV presenters, all media people.
Correspondent: You and Muzi go back a long way; what makes you guys tick? And what’s it like working together in the studio, and in performances?
Calvin: Yeah, we are childhood friends from the same church in Bulawayo. We are brothers really. We are very different people yet over the years we have become so musically connected beyond the beat and melody. We feel very similar ideas when it comes to song direction in the studio. That makes it easy when we write or when Muzi has an idea for me or I for him. I don’t struggle at all when I produce Muzi; we just flow in the studio.
Muzi is the show man of the duo; he loves attention (chuckles), whereas I, as a producer, have no time for attention when on stage because I am too conscious about what the stage production sounds like. It can get a bit annoying because I just treat the stage like a studio, looking to have that perfection which every performer knows is difficult to attain.
Correspondent: Any live shows and tours planned around the new project? And if so, will this take you to Zimbabwe by any chance?
Calvin: Most certainly. We are planning shows in many cities but as you know, ‘Tombofara’ was launched at the Bulawayo Arts Gallery – we would love to perform there again just to say thank you to our people in our home town. Harare was and still is also crazy about us. I remember we had a Radio 3 performance at the Harare show and the energy from the audience was electric. So we have true love for our Zimbabwean people and its time we said THANK YOU.
And finally, if you are a Zimbo and anyone asks you who owns Tombofara, we officially release our people to simply say, “This is a Zimbabwean Song”. Muzi and I are simply custodians of God’s gift to the people.
The ZAA celebrate the achievements of the Zimbabwean community in the UK. Tickets to the event are available on the zimachievers.com website but sales will be closing shortly, so prospective guests are advised to book their seats as soon as possible to secure their attendance. Organisers have this year introduced a world class ticketing system that allows guests to choose their seats and pay for them entirely online. Apart from a sumptuous three-course meal preceded by a drinks reception, a professionally hosted awards ceremony and entertainment from a stellar cast of performers, including Afrojazz queen Prudence Katomene-Mbofana, guests will also be treated to an after-party until 4am at the same venue.
Calvin Gudu – “GREAT”