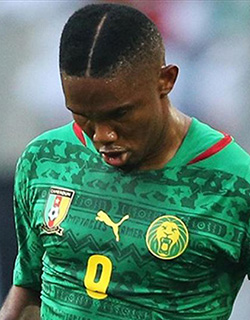 CAMEROON’S squad will depart for the World Cup 12 hours later than scheduled after ending a strike over bonuses that saw them refuse to board the plane to Brazil on Sunday, the country’s federation (FECAFOOT) have said.
They have settled a dispute with the government and FECAFOOT and will receive 5.8 million CFA francs (£7,200) more than the 50 million CFA francs originally offered to each player for their participation in the tournament.
“Everything is ok now. We will embark tonight,” FECAFOOT spokesman Laurence Fotso told Reuters, adding that the federation had to borrow the funds to pay the bonuses.
“That money is given (by FIFA) three months after the end of the competition,” said Fotso. So FECAFOOT “borrowed money as a private loan to satisfy the players.”
Cameroon coach Volker Finke told German broadcaster Sport1: “There has been an agreement now and there is no need to make a big sensation out of it or make huge stories out of it.”
The players initially refused to leave their Yaounde hotel on Sunday for an 08:00 GMT departure for Rio de Janeiro, where world governing body FIFA said they were expected at 19:25 GMT.
They are now scheduled to depart at 20:30 GMT on a charter plane which will get the squad to Brazil just four days before their opening game against Mexico on Friday.
Cameroon’s footballers have refused in the past to play because of rows with FECAFOOT over cash, and the run up to this tournament has been undermined by disagreements over the payment the squad should receive for playing in Brazil.
Acting FECAFOOT president Joseph Owona said in a statement on Saturday: “The Cameroonian football federation regrets to announce that the departure of the special plane which must transport the national team as well as Cameroon’s official sports delegation to Brazil was postponed late this evening.”
The players remained at their hotel and journalists were barred from meeting them. Owona held talks with staff in his offices and later joined sports minister Adoum Garoua in discussion with the players to resolve the dispute.
Cameroon’s players last week threatened to strike until they received promised payment for participating at the World Cup but such action was suspended ahead of the 2-2 draw with Germany in a friendly last Sunday, French sports paper L’Equipe reported.Advertisement

The players boycotted the traditional handing over of the national flag to the team captain on Saturday after their last warm-up match against Moldova, forcing the prime minister, Philemon Yang, to give it to their German coach Finke instead.
Skipper Samuel Eto’o, who did not play in the 1-0 win over Moldova, left the stadium just before the final whistle and declined to speak to reporters.