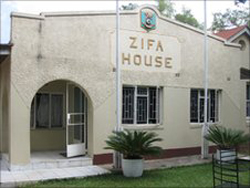 THE Confederation of African Football (CAF) has named the set of Cameroon match officials for Sunday’s rescheduled African Nations Championships (Chan) qualifier between Zimbabwe and Zambia set for Rufaro.
Referee Aurelien Juenkou and his assistants Fuanta Joseph Lambi, Elvis Noupue and Christopher Nde are the match officials.
Zifa communications Xolisani Gwesela said Tuesday: “The referees are here already and we will foot the cost of their stay until they leave, but we will take up the issue with the match commissioner when he arrives here.”
The match was initially set for last Sunday but the match officials failed to arrive in Zimbabwe on time after they missed their connecting flight to Harare and eventually failing to arrive. They finally landed in Harare on Tuesday and will be in the country until Monday at Zifa’s expense.
Broke Zifa say they have already spent US$10,000 on the match officials. Match commissioner Ian Mcleod from South Africa is expected on Saturday.
The match had been pushed to 1630hrs last Sunday, but had to be called off altogether as Zambia were due to fly to Paris, France for Wednesday’s international friendly match against Senegal with 10 of the players who were due to have done duty at Rufaro.
Football Association of Zambia (FAZ) president Kalusha Bwalya says they respect ZIFA’s decision to postpone the match.
“It is a great inconvenience but it was the best decision that can be reached,” Kalusha said. “I think that the situation of the match not being played has been unfortunate because you know the team prepares and you cannot play the match.
“It is big inconvenience it is not ZIFA problem and ZIFA did everything possible to have the referees get here.”
Meanwhile, the CHAN return leg qualifier will go ahead as scheduled on August 24 at Levy Mwanawasa Stadium in Ndola.Advertisement