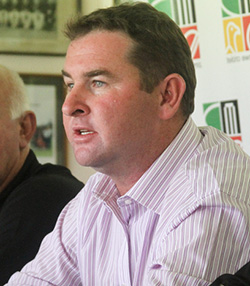 FORMER Zimbabwe captain Alistair Campbell has warned that the country could soon be “lost to international cricket” unless drastic action is taken.
He said that the lack of former international cricketers in the current Zimbabwe set-up is hurting the team’s progress.
“Without any attention being paid, we can become like Kenya and cricket will be dead in Zimbabwe,” he told the Dhaka-based daily Prothom Alo.
“I am fearful that in the next two years if there is no intervention, very quickly they will be lost to international cricket. No one wants to see that.”
Grant Flower and Heath Streak’s move to Pakistan and Bangladesh respectively meant that Zimbabwe needed batting and bowling coaches but Campbell said although the current coaches have the requisite qualifications, their lack of wider exposure means that the players don’t get expert advice on a regular basis.
“Douglas Hondo is the only player to play Test cricket in the whole setup,” Campbell said.
“Among the selectors too, no one has played Test match cricket. I worry that there is not enough expertise in the game. The business of cricket requires cricketers to be involved, but that’s not happening in Zimbabwe.
“When a batsman here is struggling against spin, there’s nobody there who can talk from personal experience. Say someone like Grant Flower, he would have said guys this is how you play left-arm spin. ‘If we play like this we will get knocked over, if we play like that we have half a chance’.
He added: “I don’t think our youngsters here are getting the requisite expertise required. As a player I would listen to someone who has been there, done that.
“I just hope a lot of the ex-players can be re-engaged by Zimbabwe Cricket. I tried to do that when I was in the cricket committee,” he said.
With Flower as batting coach, Pakistan’s batsmen have amassed 13 hundreds in their previous three Tests.
“He [Grant Flower] is their [Pakistan’s] gain, and our [Zimbabwe’s] loss. Unfortunately, you don’t know what you lost till it is gone,” said Campbell.
“I think that’s what Zimbabwe will wake up to in the coming months. In a nation like ours which is always struggling to compete and remain relevant, you have to tap into every single resource.”
And one of those, Sean Williams, was not considered for selection for the Bangladesh tour after interruptions in his involvement in a training camp and an aborted disciplinary hearing.Advertisement

A Harare-based daily reported that Williams asked for family-responsibility leave during the Zimbabwean squad’s training camp in Harare and arrived three days before the players were due to leave for Masvingo for their practice game.
The coach Stephen Mangongo wanted Williams to travel for that match, subject to a hearing to look into the reason for his absence for the bulk of the training.
Williams was unhappy that an official process was put in place and threatened to quit the squad but later spoke to Mangongo and apologised but it came too late.
Campbell said that a path should have been found to resolve the matter and bring Williams to Bangladesh, especially given the dearth of cricketing resources in Zimbabwe.
“Sean Williams obviously needs to sort out things with the coach. In a country with meagre resources, you need everyone to get along,” said Campbell.
“Banning him from playing on such a crucial tour with the whole world watching, you have to make sure you have the best side. I just think you need all your best available players.
“I think Sean [Williams] plays well against spin and bowls good left-arm spin. Part of your job as a coach is man-management. [Mario] Balotelli can play football because he doesn’t get banned and they try and work with him. I don’t know what Sean [Williams] has done.
“I have to get to the bottom of it. But he didn’t commit murder, but he has breached team protocol. We haven’t got an abundance of players to throw guys by the wayside. Sean [Williams] is arguably our second best batsman and not having him here is crazy.”
Williams has scored two centuries in two matches since the domestic season began last week.