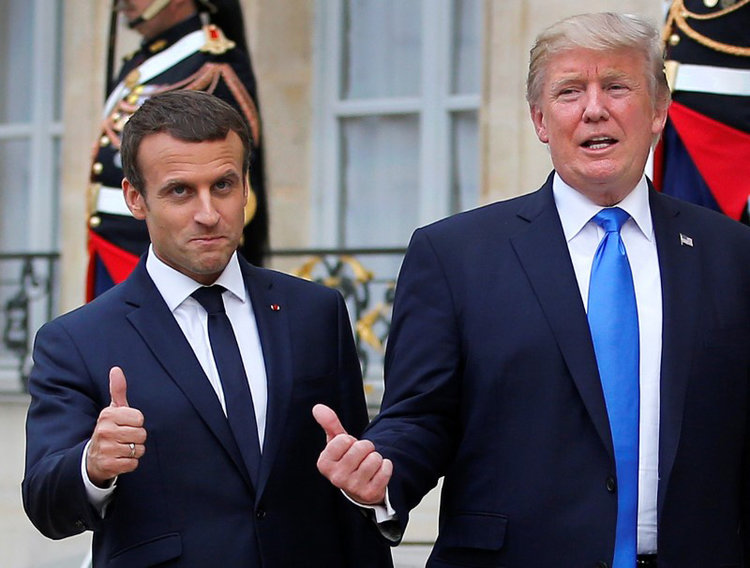 FRENCH President Emmanuel Macron seems, as much as any world leader, to have developed some kind of rapport with his American counterpart Donald Trump.

But will their apparent bond prove productive as European capitals struggle to save the Iran nuclear deal from Trump’s impulsive wrath?

The idea will be tested Monday when the young French leader begins a state visit in Washington, and European diplomats have a lot invested in what seems a tricky task.

There is not much time. Trump is due to decide by May 12 whether talks with Paris, Berlin and London on tougher anti-Iran measures have advanced far enough.

If he feels the “flaws” in the 2015 deal have not been adequately repaired, he may decide to withdraw his support, opening the way for renewed US sanctions that could torpedo the whole accord.

Europe would see this as a disaster, both in terms of the deal itself — a central plank in their non-proliferation strategy — and in terms of relations with Washington.

If anyone can talk down Trump, it might be Macron, who has better relations with the White House than his British and German counterparts Theresa May and Angela Merkel.

Paris was the first European ally to suggest tougher measures against Iran’s ballistic missile programs to “supplement” the nuclear deal — but will that suffice?

Trump also wants to reform the agreement itself to end the so-called “sunset clauses” that would allow Iran to progressively restart parts of its nuclear program after 2025.

But the West cannot unilaterally reopen the text.

Iran has said the deal is final and warned it is ready to relaunch its nuclear programme — which the West alleges is designed to produce an atomic bomb — if it fails.

Foreign Minister Mohammad Javad Zarif told CBS television’s “Face the Nation” in an interview airing Sunday that Iran would have several options if the US pulls out of the deal “including resuming at a much greater speed our nuclear activities.”

In addition, the agreement was the fruit of months of intense diplomacy between Britain, China, France, Germany, Russia and the United States — under EU auspices.

Only Trump wants to rip it up.

“It’s a dialogue of the deaf,” complained one European envoy. A US diplomat acknowledged that getting Trump to buy in will be the “trickiest” part of the problem.

British, French and German representatives have been in deep talks with the US State Department’s head of policy Brian Hook on what a supplemental deal would look like.

But the representatives complain privately that, despite progress with their American counterparts, they have no idea whether they are close to an agreement that the mercurial president would accept.

To appease Trump, European capitals are working on a document that would amount to a political engagement to prevent Iran from returning to the nuclear path after the 2015 deal starts to expire.

Zarif said the original deal included a vow that Iran will never seek a nuclear bomb, and repeated Tehran’s insistence that it had never sought one.

The Europeans could even call such a statement a new “deal,” if it convinces the US leader to stay within the terms of the original and “true” agreement.

“He hates the deal,” another European diplomat acknowledged.

All Hook can say is that once he comes to terms with his European partners, it will be up to Trump, in consultations with his hardline new National Security Advisor John Bolton, to decide.

“If we can reach an agreement, then that will be presented to the president by the secretary of state and the NSA, and then he will make a decision on whether he wants to remain in the deal or stop waiving sanctions,” Hook said.

“We always have to prepare for any eventuality, and so we are engaged in contingency planning because it would not be responsible not to engage in it.”

The appointment of Bolton, an avowed Iran hawk, fueled Europe’s pessimism, as did the nomination of CIA director Mike Pompeo to become the next US secretary of state.

But Pompeo, who has always talked tough on Iran, played down the significance of the May 12 deadline in his Senate confirmation hearing.

“I want to fix this deal. That’s the objective,” he told US lawmakers concerned that he might push for war.

“If there is no chance to fix it, I’ll recommend to the president we do our level best to work with our allies to achieve a better outcome and better deal. Even after May 12th, even after May 12th, there’s still much diplomatic work to be done.”

As the deadline looms, even some of the more hawkish Washington pundits — critics of the deal when it was signed — have begun to suggest that the return of US nuclear-related sanctions could be postponed until a new fixed date.

But if all the talk fails and Trump follows his clear inclination to tear up the “terrible deal,” there appears to be no Plan B, at least from Europe.

“Anyone who wants to blow up the Iran deal has first to tell us what he will do if Iran relaunches its uranium enrichment program,” France’s ambassador to the United States Gerard Araud tweeted in exasperation.

After Macron’s visit, there is only one from Merkel, whose chemistry with the US leader appears more toxic than productive, and then the ball in Trump’s hands.