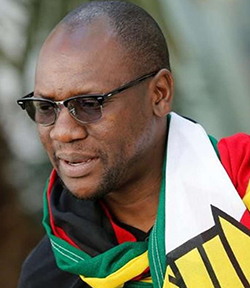 ON the night that Pastor Evan Mawarire fled Zimbabwe, on 15 July, I spoke to one of his fellow activists, trying to get a sense of what it meant. At the time, Pastor Evan was insisting that his departure was for a previously scheduled event, and nothing to do with the political whirlwind in which he and his family had been engulfed. The government’s skilled propagandists, meanwhile, jumped on his exit as proof that the pastor was being paid by foreign powers, that he was a coward, that he didn’t practice what he preached.
“We will miss him,” Mawarire’s colleague admitted. “But this is bigger than one man.”
I wasn’t so sure. Mawarire’s #ThisFlag campaign had, in just a few short months, almost single-handedly resuscitated opposition politics in Zimbabwe. Its positive message of change, combined with its explicit rejection of party politics, had struck a chord with disaffected urbanites, while the canny use of social media had amplified the message.
But it was much more than a social media movement. When Mawarire was arrested, on trumped up treason charges, a crowd of thousands protested outside the Magistrate’s Court in Harare. This show of public defiance