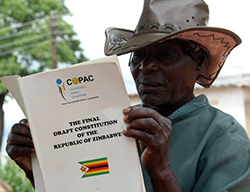 I HAD taken a break to indulge in the festivities, like everyone else, but when I checked my inbox, I discovered quite a number of enquiries and I thought I would respond to the most common one. It might be the season of festivities, but politics in Zimbabwe has hardly taken a break.
After the political tsunami that engulfed Zanu PF during the last quarter of the year, it looks like more plots and sub-plots have emerged. One issue that has arisen in the post-Congress period is the fate of politicians who were allegedly aligned to ousted Vice President Joice Mujuru. Already, we have seen a purge of Ministers in two waves after Congress. The next target seems to be MPs suspected of being aligned to the former VP.
One province, Mashonaland Central is reported as having identified at least 9 MPs whom they want “booted out” of Parliament. The Herald reports that other provinces have similar concerns and plans regarding MPs who are similarly suspected of belonging to the “wrong basket”. Other media reports speculate that as many as 100 Zanu PF MPs may be facing this predicament.
The purpose of this note is to consider the legal aspects of this proposition. If the provinces identify the outcasts, can Zanu PF recall the MPs and cause their expulsion from Parliament? The answer to this is that, yes, in terms of the Constitution, Zanu PF can cause their expulsion but there are key safeguards which the MPs can make use of to protect or at the very least, delay their fate. The situation is not quite as straightforward.
The relevant provision is s. 129(1) (k) of the Constitution, which provides that the seat of an MP becomes vacant, “if the Member has ceased to belong to the political party of which he or she was a member when elected to Parliament and the political party concerned, by written notice to the Speaker or the President of the Senate, as the case may be, has declared that the Member has ceased to belong to it”.
The effect of this provision is that the party seeking to “recall” an MP must first expel the MP, after which it must communicate the decision in writing to the Speaker of the National Assembly or the President of the Senate. The party can only act after the member has ceased to be its member – by resignation or by expulsion. And since they are unlikely to resign, Zanu PF will have to expel the so-called outcasts and then write to Parliament to advise that they are no longer its members.Advertisement