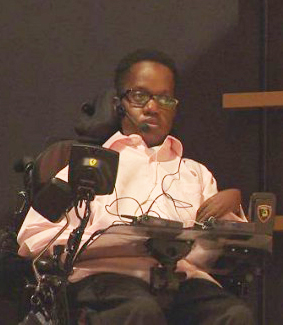 MONTREAL: A special concert was held last Saturday night at Concordia’s Oscar Peterson Concert Hall.
The United Tribulation Choir, a Montreal-based R&B Gospel group, launched their first album entitled Seasons Change.
“It’s pretty exciting,” founding member, Gift Tshuma, said of the launch.  “It’s the biggest project that we have ever put out.”
The group first came together nine years ago — the brainchild of two brothers –Paul and Gift Tshuma.
The siblings know a thing or two about tribulations, hence the name of the choir.
The Tshuma brothers were born in Zimbabwe and both suffer from muscular dystrophy, an incurable disease that causes progressive weakness and loss of muscle mass.
They moved to Montreal with their mother in search of a better quality of life, while the rest of the family remained in Zimbabwe.
Although the Tshuma’s are both confined to wheelchairs, unable to move their limbs, they love to perform.
“Our music allows us to reach people in very special ways,” Gift Tshuma said.
Paul and Gift both write and sing. They hope the music on their new album will have a transformative impact on people’s lives.
According to the brothers, the name of the album is symbolic of life’s cycles.
“Whatever we go through in life is the changing of seasons,” Paul said.
“The difficulties, sometimes the happy moments, the sad times, the good times,” because like the seasons, all those moments come to pass.Advertisement