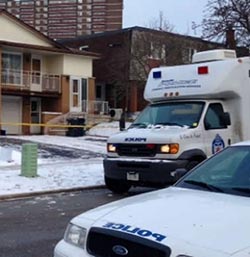 THIS Sunday, as the Denver Broncos watched their Super Bowl XLVIII victory disappear; in front of their eyes 43 to 8, Peyton Manning being the leader he is, still tried to rally Denver back, for a major comeback. Zimbabwean religious leaders at that very same moment were gathered within apartments and holding small vigils across Toronto; in order to commemorate the one year anniversary, for Caroline Mkurazhizha who was murdered at the very same time last year under heinous circumstances by Adam Bharwani, allegedly.
Caroline Mkurazhizha was a 23 year old Zimbabwean foreign student who was strangled to death in her apartment allegedly by her roommate, 18 year old Adam Mohamed Bharwani in the North York area of Toronto on Saturday the 2nd 2013. Statistically and within Toronto, Caroline ended up being the 5th murder victim of a 57 homicide case count for the year 2013. Her homicide actually became the harbinger of a year that had younger adults under the age of 30 being killed due to homicides within Toronto than what was usually the norm.
On the first anniversary of her death this week, several pastors gathered within Toronto to say prayers on behalf of the Mkurazhizha family. As well as announcing to the general public that a tentative trial date had been made by the Ontario courts for September the 8th and that a procedural hearing had been held on January the 28th. Unfortunately the lack of Canadian-Diaspora civil action regarding the Mkurazhizha murder case has been galling to say the least, only further highlighting the tribal, social, political and organizational fractures that exist within the Zimbabwean-Diaspora community within Canada.
Taking into consideration that there is a certain “Zimbo” constituency within Canada that really does not care about Zimbabwe issues, it is amazing and disconcerting to know that there exists an apparent dysfunction within the higher echelons of Canadian-Zimbabwean leadership. These motivated and passionate individuals, who usually work for free, are somewhat having a difficult time amalgamating Canadian-Zimbabweans around certain central themes important to our development.
An issue or agenda such as the Caroline Mkurazhizha’s murder has somehow failed to garner traction within the Canadian-Zimbabwe Diaspora, even though this issue has singlehandedly managed to raise several policy issues that affects all Canadian-Zimbabweans namely:Advertisement

The lack of communication apparent amongst Canadian-Zimbabwean leaders who are leading and spearheading different organizations within Canada has resulted in the stratification of information which ends up being disseminated along distinct Zimbabwean demographics instead of organically. Bluntly speaking, wealthy or well assimilated Zimbabweans within Canada do not congregate or associate amongst new Zimbabwean immigrants or poor Canadian Zimbabweans. This lack of cultural cohesion is driven mainly by maintaining a “class” system amongst Zimbabweans. Issues such as tribalism and political inclinations only become major or emergent agendas because most Zimbabweans would have figured out where they stand on the “class” hierarchy within their community.
Money and class is what truly drives Zimbabwe and this mentality has affected the way Canadian Zimbabweans think in regards to viewing Zimbabwe as a country and themselves as individuals. Exploiting Zimbabwean agendas whilst contributing to Zimbabwean development has created a vacuum of Canadian-Zimbabwe talent and experience who think this is a waste of time. Most talented Canadian-Zimbabweans are either afraid to lead or just plain selfish, most often lacking the wherewithal to accept thankless and low paying positions just so that they can prove a point and follow their principles.
The Canadian-Zimbabwean elite or the ultra-talented Diaspora find no advantage in joining the local Zimbabwe issues; they see African issues as just being black and intractable. Therefore most Zimbabwean organizations within Canada are led by middle class people sick and tired of the social ills within their community and tired of privileged Canadian Zimbabweans sitting on their hands waiting to take advantage of how the wind blows, however lacking the resources to do anything.
In Canada, usually the rich Zimbabweans quietly handle their issues whilst the majority of Diaspora Zimbabweans pool their resources together and worry about the fortunes of their motherland. Caroline Mkurazhizha’s murder also highlighted the underlying animosity within the Canadian Diaspora against the Zanu PF establishment and any associates related to them within Zimbabwe’s ruling class. Although Caroline was a 23 year old youth, she was dragged into the cesspool of Zimbabwe politics due to the fact that her father was a former deputy police commissioner.
Yet again the lack of leadership within the Zimbabwean Diaspora led to a lack of social-political neutrality and the fomenting of tribalism, hate and class warfare amongst Zimbabweans within Canada. Kitchen table and barbeque debates are constantly being discussed amongst “Zimbos” based on the precedent of a Zimbabwean’s political affiliation instead of what their bread and butter issues are.
The easiest way to collate the repercussions of this worrisome situation and analyze it is by observing the rise in teenage pregnancies and juvenile incarcerations for Zimbabwean children within Canada.  Delinquency and truancy rates amongst Zimbabwean high school children are currently rising within North America. Zimbabwean Canadian children are beginning to associate themselves with the slavery history of North America more than their own lineage.
It is abysmal that some Zimbabweans within Canada have found themselves confused, on whether to defend or fight for Caroline Mkurazhizha simply because she is of Shona lineage and Zanu-PF descent (politically) instead of the fact that she is a Zimbabwean. People forget that Caroline was a 23 year old Zimbabwean girl who was strangled in her apartment far from home or family, simply trying to get an education.
On the 2nd of February 2014, Peyton Manning and the Denver Broncos lost to the Seattle Seahawks 43 to 8, a year earlier on the same date, Caroline Mkurazhizha stepped into her room in North York Toronto and was strangled to death by an 18 year old teenager, for unknown reasons.  How can the Canadian-Zimbabwean leadership contribute to Zimbabwe’s growth when they can’t even get local “Zimbo” issues solved? Zimbabweans have been so transfixed on getting rid of President Robert Mugabe that they have forgotten that other issues exist besides him. President Mugabe will die; however our problems will remain.
As we patiently wait for Caroline Nyumwai Mkurazhizha’s trial date (this Black History Month) on September the 8th, please let us remember that the importance of persistence and struggle will continue; we can never forget our fundamental love for being black.
“One black person at a time”
Tsungai Chipato is a journalist and a blogger based in Toronto. Contact him @ mugaradzakasungwa@gmail.com