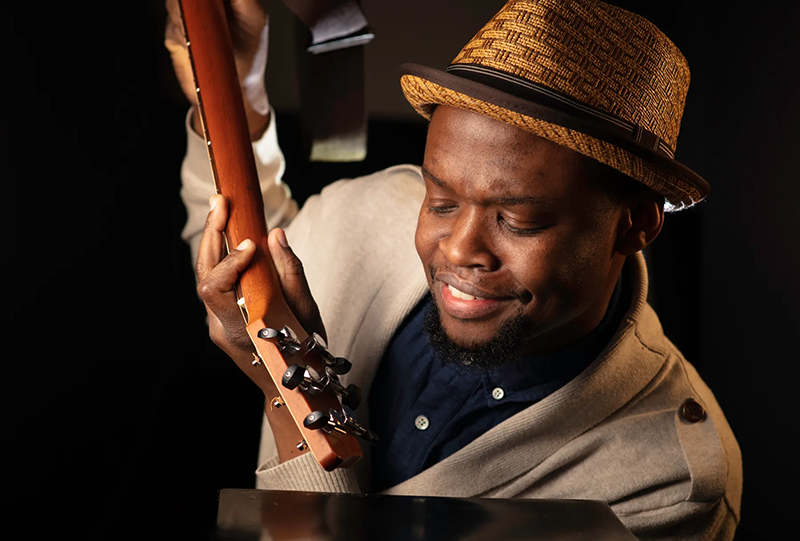 Zimbabwe-born Munya Mataruse will play Folk on the Rocks after winning the festival’s Main Stage Showdown on Saturday.

The contest, held at Yellowknife’s Elks Lodge, saw nine entrants compete to win a place on the Folk on the Rocks main stage alongside a $500 cash prize.

Mataruse was declared the victor by a panel of six judges. (The author of this report was one of the six).

In the space of a 10-minute set, Mataruse – equipped with a guitar and backing track – had a sold-out crowd on their feet learning a series of moves.

An audience member cried “He’s so sweet!” as Mataruse delivered an acceptance speech, telling the other acts: “Competition doesn’t mean that if you didn’t win, you’re not good. You’re good. But there has to be someone who has to be selected from the whole process, right?”

He told the eight rivals for the main stage slot: “I am willing to work with you guys in any projects that you do. You are beautiful musicians, all of you guys.”

Mataruse has been playing professionally for 17 years.

He came to Yellowknife in 2020 having recorded two albums in Zimbabwe, where his impact on stage was once likened to dynamite by Bulawayo daily newspaper The Chronicle.

On Saturday, he displayed depth, flair and complete control of his guitar and voice to build an instant rapport with the room, something that will be vital faced with a main stage audience in July.

“I love you all. I really enjoyed all of your performances,” he told the remaining contenders as the show concluded.

“Everyone here did a good job. The competition was really tight.”