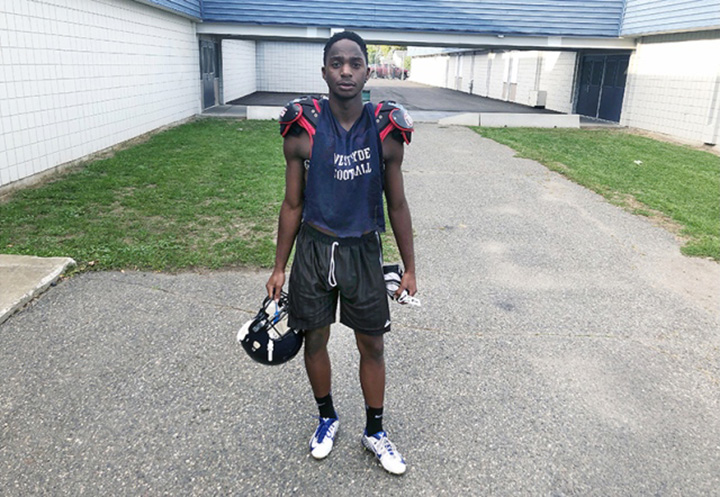 Darlington Murasiranwa rushed for 300 yards and five touchdowns in his Westsyde Blue Wave debut, a 17-year-old rookie playing in his first football game. Far more remarkable than that statistic is what his family endured to be together.
Spread This News

*This article is taken from Kamloop This Week

CANADA: THE Murasiranwas’ story is about a separated family’s quest for a better life, a heart-wrenching but necessary Zimbabwean exodus, agonizing refugee nomadism in North America and the death of a brother and son.

Parents Armstrong and Emillia call their tale an ode to Canadian acceptance, one that twists and turns through South Africa and across the U.S. before a touch-and-go stop in Edmonton and arrival in Kamloops.

Westsyde Blue Wave football coach Cory Bymoen has never seen anything like it in 20 years on the sidelines, a gift from the gridiron gods on the eve of the season.

Darlington Murasiranwa, 17, is at the centre of it all.

Several months before Darlington’s birth, his father, Armstrong, joined a growing number of friends and family members who left home in Zimbabwe in search of prosperity, not realizing years of hardship and family estrangement were ahead.

“In 2000, things were going down in Zimbabwe, politically, economically, the jobs, the money … people were losing jobs and the money was getting weaker and weaker. Food was getting more expensive,” Armstrong said, noting friends and relatives were fleeing to Australia, the U.S., the United Kingdom and South Africa.

“I couldn’t go with my family. I just had to go by myself to find somewhere for them to live. I thought it was going to be easy to get immigration papers. It wasn’t. It was so tough.”

Emillia made the decision to join her husband in the U.S. in 2003, leaving Darlington, born in 2001, and his elder brother, Kuda, to be taken care of by their grandmothers, both of whom were widows.

“It’s a very hard story to tell,” an emotional Emillia said, standing outside Westsyde secondary while speaking to KTW. “It’s painful. I don’t have any words. I’m sorry about this. They were growing up. I didn’t have my kids. I tried to find a visa with my boys, but was denied.

“My mom told me every time Darlington saw an airplane, he would point and say, ‘When are mom and dad coming home?’”

Communication remained constant between parents and children, countless phone calls and Skype sessions to help them through a long, painful era — 10 formative years for Darlington and Kuda during which they never saw mom and 13 without seeing dad.

“Life was too hard at that time,” Emillia said. “My history is very tough. We tried to find my family a better life.”

Armstrong, a boilermaker, sought work across the U.S., bouncing around shipyards in Louisiana, Philadelphia, San Diego, North Carolina and Mobile, Ala., all the while trying in vain to bring his children over from Africa.

“She [Emillia] was always crying,” Armstrong said. “At the same time, I’m crying inside. For us to go back, it was too hard. It was better that we can send money there and they can have a good life. They could have food on the table.”

Once it became clear a new beginning for the family in the U.S. would not materialize, the couple moved north and settled in Edmonton.

Refugee status meant if Armstrong and Emillia left the country, they could not return. This fact became nearly unbearable in 2010. Armstrong had never seen Darlington, who was nine at the time, and it had been seven years since Emillia left her toddler and his older brother in Chitungwiza.

But there were also three other siblings. When Emillia married Armstrong, he had three young children from a previous marriage — Armstrong Jr., Auntienett and Aaron.

“I raised them,” Emillia said. “We are one big family, my side and his side.”

Darlington and Kuda left Zimbabwe and moved to Stellenbosch, South Africa, in 2008 to live with their brothers and sister.

“Violence came to Zimbabwe, especially in 2008,” Armstrong said. “That’s when we moved them. There was violence and starvation. Too much politics.”

“It was a problem he had since birth,” Armstrong said. “He lost his life and it was tough for us. We couldn’t go back. That was the toughest thing in our life. We couldn’t go back for his funeral. Why? Because if we went back, we wouldn’t be able to come back [to Canada]. No papers. Still refugee claimants. The funeral was done.”

Darlington was asked about the loss of his older brother. He said he would rather not address the topic.

“It gave him more guts, more strength,” Armstrong said. “Not just him, his older brother, too, to face that situation.”

Added Emillia: “It’s not easy to grow up without parents on your side. Family took care of our kids, but it’s not easy without mom and dad. It’s painful.”

Years dragged on, but the Murasiranwas began to make headway on the immigration front.

“I’m proud of being Canadian,” Emillia said. “I don’t know what I can say. Every day I’m proud. We were welcomed here.”

By 2013, Armstrong and Emillia were permitted to leave Canada, knowing they would be allowed to return.

They flew to Cape Town for an airport reunion of a lifetime, one Emillia acknowledged created quite the scene — an outpouring of emotion more than a decade in the making.

Armstrong held his son, Darlington. That had never happened before. Kuda and Darlington hugged their mother for the first time in 10 years.

The family was whole again, although it was missing Armstrong Jr. They visited his grave.

Kuda and Darlington moved to Edmonton from Stellenbosch in 2014 and were quickly discovered by high school and post-secondary coaches, which prompted yet another family uprooting.

FC Edmonton recruited fledgling soccer star Darlington, who was then invited to join the Vancouver Whitecaps’ residency program in 2016.

“It was burning our hearts. Like, again? He’s leaving?” Armstrong said. “We haven’t stayed with him. I had never seen him since he was born. I only saw him when he was about 13. We decided to go to Vancouver and live with him there, so we could see him every day.”

Vancouver proved too expensive, so Armstrong and Emillia moved to Kamloops. Darlington would visit when possible, but attended school on the Coast until he was released by the Whitecaps. He moved to Kamloops this past summer.

The 21-year-old runner was recruited to compete in track and field for the University of Guelph in 2018-2019 and plans to try out for the Gryphons’ football team. Kuda excelled at running back after being wooed to the sport by his coach at Holy Trinity Catholic High School in Edmonton. He encouraged his younger brother to join the Blue Wave.

“When I came to Westsyde, we were talking on Facetime and he was like, ‘Hey, man, they have football. Why don’t you try it out?” Darlington said. “He was like, ‘Just try and not get tackled. Just run for your life.’

“I never really thought I would play. My brother always calls me weak.”

Last month, on the first day of the school year, Westsyde football coach Bymoen crossed paths with the new Grade 12 kid in town and invited him to practice that Monday afternoon.

“By Tuesday night, we had basically revamped our offence,” Bymoen said, noting the team has newfound playoff aspirations, thanks mostly to Darlington.

“This changes things. It never happens with me. We hear the stories. You’re always hoping. I’ve never had somebody come into the school like that unannounced.”

The rookie had an impressive debut, to put it mildly.

Darlington racked up more than 300 yards rushing and scored five touchdowns in his first exhibition game on Sept. 15 in Surrey, with little to no knowledge of the game and almost zero playing experience. Westsyde blanked Frank Hurt 42-0.

The 6-foot, 165-pound back has not played a regular-season snap, but Bymoen has already heard from Rice University’s NCAA Division 1 program about the Zimbabwean speed demon.

Darlington needs to dig into his playbook and get live reps before any talk of post-secondary football should be heard.

“As soon as I get the ball, I’m scared,” said Darlington, who is also turning heads on the basketball court. “I’m like, ‘Oh, he’s coming. What should I do?’ But I’m getting used to it and I’m loving it.

“I love my teammates. They’re great. The first day, I was really nervous. In the changing room, they were all coming to me, ‘Hey, what’s your name?’ I felt welcomed. Now, I enjoy it.”

The future looks promising for Darlington and Kuda, regardless of what happens with athletics.

They have access to health care and medication and never have to worry about going hungry.

Emillia found employment at a nursing home. Armstrong works in Fort McMurray, seven days on and seven days off.

Remembering remains traumatic, but looking ahead has never felt so good.

“Life sometimes has been very tough,” Emillia said. “You have to be strong. I have to thank God for now. We are here with my kids and I like Kamloops. People love each other. That’s why I’m here. Edmonton is good, but it’s very freezing. Right now, they are wearing big jackets.

“I love Kamloops no matter what. It was very difficult to leave my boys, but right now we’re together.”