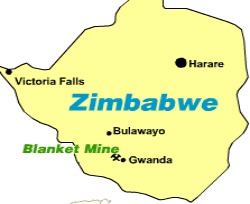 CANADA based Caledonia Mining Corporation says it is in the hunt for new opportunities in Zimbabwe despite biting cash shortages which have forced other international investors to look elsewhere.
Caledonia owns 49 percent of Gwanda’s Blanket Gold Mine in accordance with the country’s indigenisation laws and generates about $70 million in foreign currency for Zimbabwe annually.
The country has been battling foreign currency shortages since last year which have meant that investors cannot take their profits and dividends out.
Monetary authorities have blamed the shortages excessive imports and externalisation of the United States dollar which was adopted in 2009.
Bond notes introduced last November have failed to ease the cash shortages or boost exports as promised by the Reserve Bank of Zimbabwe.
However, while acknowledging the country’s economic situation is disruptive to business, Caledonia vice president Maurice Mason argued the benefits accruing to his company are still outweighing the challenges.
“We think Zimbabwe has been through the valley of despair and is coming out on the other side. Things are improving for us,” Mason said in an interview with Reuters.
“The government gives us preferential status because we generate forex. We have a relationship we believe is appropriate with the government.
“We are interested in looking at other assets that are profitable and of good quality.”
Although the opportunities scouting also includes other countries, Zimbabwe remains on Caledonia’s priority list because of the preferential treatment the company receives from government including cyanide and dynamite licences.
Caledonia mine generates about $70 million in foreign currency for the Zimbabwean economy every year and receives export credit at a rate of 3, 5 percent from the 5 percent it pays in government as royalties.
The mine targets at least 54 000 ounces this year and 80 000 ounces in 2021.Advertisement