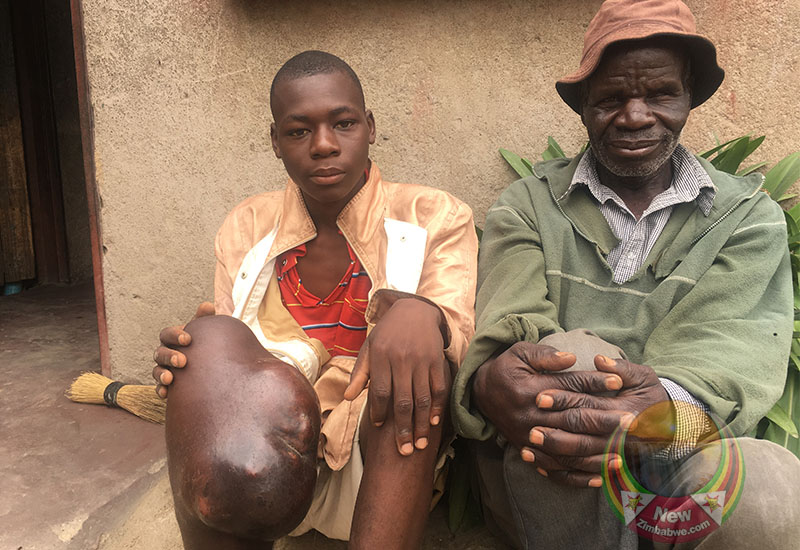 Knowledge Machata and his father Wilbert
Spread This News

Knowledge is from Manicaland province’s south-eastern district of Chipinge and last year topped his class with six units at the Grade seven final year examinations at Mutandwe Primary School in the district despite his condition that is worsening with each passing day. Ironically, his dream is to become a medical doctor “so I can help our people.”

His family, like most from the part of the country, can hardly afford food, let alone medical aid to fund his treatment. It can only watch him painfully waste away.

What started as a freak accident at school has turned into a nightmare and with it, his dreams slowly ebbing away.

The teenager said he hit his leg onto a desk by accident and the little scratch developed into a growth that is now eating at his life.

Knowledge is now confined to his family homestead given he cannot manage to attend secondary school because of pain.

His father has all but given up.

“We have done all we can from the local clinics in Chipinge to Harare but the growth continues to expand,” explains the boy’s father Wilbert Machata.

With doctors currently on strike and as if by some freak of nature, Knowledge’s medical records at the country’s biggest health institution Parirenyatwa Group of Hospitals have disappeared.

“We were referred to Parirenyatwa Hospital but nothing materialised as we were told that scan and his file with all his medical records could not be found.

“After several visits to Parirenyatwa, they finally told us to stop coming promising us that if the test results and the file is found, they would call and inform us the way forward,” Machata said, his eyes welling with tears. The pain of a father watching his son’s life being snuffed out slowly visible on his face.

“Almost four months to date, no phone call has come through. I have also tried to call but no one is picking my calls.”

Knowledge said he is in unbearable pain and can hardly sleep at night.

“I do not sleep during the night. The leg is so painful that sometimes I wish the doctors could just remove it,” he said tearfully.

“And now I feel lonely during the school days and it’s almost a year without attending school. Most of my peers are in school and almost done with Form One. I am already behind with school work.”

His is a lamentation that can move any heart.

Knowledge adds: “The pain was too much for me to walk to school.”

His father performs menial jobs and is now appealing to well-wishers for US$750 so that his son could get medical assistance from private medical doctors.

“I can’t afford to visit private doctors because when we inquired, we were told that the procedure to treat Knowledge would require US$750. I can’t afford that since I am not employed,” said Machata.

Doctor Akimu Mageza, founder of Global Orthopedic Foundation, said they are willing to help with labour free of charge as long as someone picks up the bill.

“We suspect this could be bone cancer which had been growing and very painful and now he has difficulties in walking and he has to use a makeshift clutch,” said Mageza, a specialist Orthopedic and trauma surgeon.

“As you know, for anyone to access health care, it requires money but I am told a tissue biopsy was done among other investigations at a local hospital but we don’t have the results yet because of the current impasse between doctors and government.”

“The medical practitioner added: “But going forward, we are starting all over again. Baines Imaging Group has offered and done an MRI, CT and ultrasound scan for free. Next we need a blood test and hopefully this can be done in the next day or two.

“According to rough estimates, for the whole medical operations to be done, he needs about US$750 those includes theatre procedures and all.”