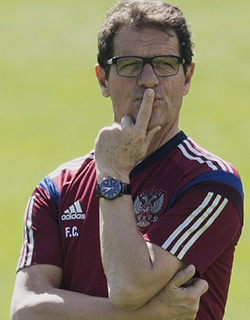 FABIO Capello’s Jiangsu Suning slumped to the bottom of the Chinese Super League at the weekend after a defeat to a Shanghai SIPG side missing their banned star players and manager Andre Villas-Boas.
The Italian coach was left still searching for his first league victory since being appointed last month at Jiangsu, who have spent heavily on midfielder Ramires from Chelsea and attacking midfielder Alex Teixeira.
They were runners-up last season but hit rock-bottom at the weekend with the 1-0 home loss to SIPG, who closed the gap on leaders and reigning champions Guangzhou Evergrande to one point.
SIPG did it without the suspended Oscar, Hulk and Wu Lei, and Villas-Boas was also absent as he served the first of a two-match ban for a social media post protesting about an eight-game ban dished out to Oscar for sparking a brawl.
Their victory, thanks to the only goal of the game by striker Elkeson, made it no wins from three games for former Real Madrid boss Capello in the league.
SIPG’s win, coupled with Evergrande’s 4-3 defeat at Tianjin Quanjian, made it a hugely satisfying weekend for the club after a troubled week of bans and suspensions for Villas-Boas and his stars.
Tianjin Quanjian blew the title race wide open at the halfway stage of the season on Sunday with Brazilian Alexandre Pato scoring for Fabio Cannavaro’s side.
Another Brazilian, the midfielder Paulinho, who has been linked with a move to Barcelona, scored twice for the beaten league leaders.
The victory for Cannavaro’s Tianjin propelled them up to fourth in the table after 15 games and ended a 10-game winning run in the league for Luiz Felipe Scolari’s Evergrande.Advertisement