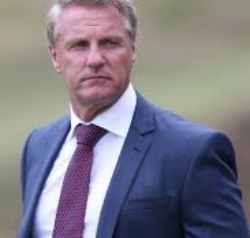 CAPS United have appointed Englishman Mark Harrison as their new coach for the next three seasons.
He was previously linked with Highlanders before the Bulawayo giants appointed Bongani Mafu last month.
Harrison was unveiled in Harare on Wednesday afternoon, just a day after resigning from South Africa National First Division side Black Leopards where he was contracted until the end of the season.
He now faces legal action from Leopards-a club where he had taken over in November.
The England-born gaffer will be assisted by former CAPS players Fungai ‘Tostao’ Kwashi and Brenna Msiska, the goalkeepers’ coach.
Harrison becomes the second Englishman at the Green Machine after Sean Connor who was fired for poor results in 2012 after a 3-2 away loss to Hwange.
Since his return to South Africa just over four years ago, the 54-year-old has built a reputation for job-hopping as he has been with Mpumalanga Black Aces, African Warriors, Chippa United, Bay Stars (third tier league) and Golden Arrows.
A statement on Lidoda Duvha’s website read: “Mark Harrison has today tendered his resignation as Black Leopards FC coach with immediate effect.
The club is considering its legal options as Harrison was contracted to Leopards until the end of the season. Black Leopards FC will not be issuing any further statements on the matter.”
Speaking at the unveiling ceremony, Harrison said he was excited at the new challenge.
“It is a new challenge, a new life. I hope to bring the best from the squad that we will assemble this season and the next two seasons while here. I know a lot about Zimbabwean football via the media and we have had a lot of players from this side in South Africa,” he said.
Club president Twine Phiri said they were looking forward to the new season despite the prospects of losing players.
Tendai Samanja and Tafadzwa Dube have left for Harare City; Dominic Chungwa and Kelvin Bulaji have joined Dynamos while Tapiwa Khumbuyani has not signed a contract extension.
“Players will always move but I believe we will still be able to field a strong and competitive team that will perform like last season. We have a number of juniors on our books who can play at the highest level.
“We qualified for the Mbada Diamonds Cup and this is the competition that will tell us where we are before the season kicks off,” Phiri, who is also the Premier Soccer League chairman, said.Advertisement