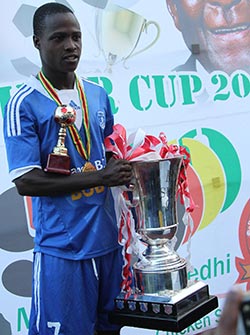 CAPS UNITED have swooped on former Dynamos attacking midfielder Ronald Chitiyo and have since added him in their 25 man squad which they submitted to the Confederation of African Football (Caf).
The Green Machine beat the 31 December deadline to submit a 25 man squad to Caf. Chitiyo has been named in the provisional Warriors’ squad for the 2017 African Cup of Nations finals which start in Gabon in two weeks time.
Former FC Platinum defender Last Sithole who was playing for the Zvishavane based side’s Under -19 squad has also been included in the squad and so has ex- Gunners goalkeeper Prosper Chigumba who was now playing for a second division side.
According to Caps United chief executive, Cuthbert Chitima, the club managed to retain all their players.
“We managed to retain all our players and we have just added three new faces in the 25 man squad which we submitted to the Confederation of African Football (Caf).
“We have Ronald Chitiyo, Last Sithole and goalkeeper Prosper Chigumba as the only new faces. We have finalised everything with Chitiyo. He is now a Caps United player,” said Chitima.
Caps United will be making a return to the Champions League since they participated in 2006.
Makatuka was instrumental for Caps United, helping them to Castle Lager Premier Soccer League (PSL) championship success, their first league title in more than a decade.
Other players whose contracts had run out include Tafadzwa Rusike, Abbas Amidu and reigning PSL top goal scorer Leonard Tsipa.
The Zimbabwean champions had also been reported to be chasing former captain Tapiwa Khumbuyani from How Mine, Marlvin Gaki (Triangle) and Xolisani Ncube (Chapungu).Advertisement