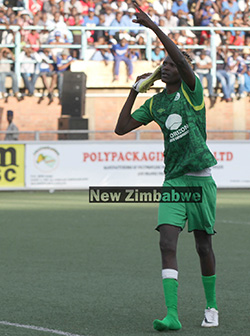 Caps United 1-1 Dynamos
(Caps United won 6-5 on penalties)
RODRECK Mutuma made his debut for Caps United in Sunday’s Sino-Cup Challenge match at Rufaro Stadium on a winning note after the Green Machine won 6-5 on penalties to give new coach Mark Harrison a flying start.
The match had ended 1-1 after regulation time.
Mutuma scored the first penalty in the lottery, Leonard Fiyado, goalkeeper Victor Twaliki, Ronald Pfumbidzai, Dominic Mukandi, and Gerald Phiri all hit the target.
Qadr Amini, Godknows Murwira, Augustine Mbara, Cliff Sekete, Blessing Moyo all converted the first five for Dynamos before Milton Makopa sent his effort over the bar with Caps already leading 6-5 on sudden death.
The winners took home $15,000 while the runners were $10,000 richer.
Dynamos fielded two former Caps United players in Kelvin Bulaji and Dominic Chungwa.
New Caps signing Justice Jangano poked in a corner in the 19th minute to send Caps into the lead after Dynamos had wasted numerous chances.
Dynamos found the equalizer via a Walter Mukanga free header from a free kick on the half hour mark.
Jangano was then sent off 10 minutes after the start of the second half after an off-the-ball fight with Dynamos’ Sydney Linyama.
Caps fans then exhibited the worst side of Zimbabwean football when they threw missiles in response to the red card.
Then five minutes from time, as the game headed towards penalties, missiles rain down from the Dynamos’ side after Milton Makopa was yellow carded.