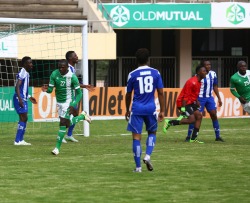 CAPS United are bidding to rehire former Strike Simba Nhivi after his return from Tanzania where he had a short stint with Singida United.
Nhivi returned from Tanzania last week following the expiry of his contract. Caps United are seeking to put together a strong squad that can compete and win the title next season and have targeted the forward.
Although the player’s manager Gibson Mahachi declined to discuss the player’s next destination, it is understood Nhivi wants to return to Caps United where he has a good working relationship with coach Lloyd Chitembwe.
Nhivi was one of the heroes of the 2016 campaign who helped the Green Machine to win their first championship since 2005.
“I can confirm Simba is back in the country but as to his next destiny we are still weighing up a number of options. I am not in a position to tell you where he will be going now until next week,” said Mahachi.
It is understood Chitembwe has since been alerted to the striker’s availability and there has been contact as the Caps gaffer rebuilds his squad ahead of the next term.
Nhivi will be the second striker to be signed by the Green Machine after they captured former FC Platinum forward Brian Muzondiwa.
The 2015 Soccer Star of the Year finalist penned a two-year deal with the Harare giants as Chitembwe puts together a squad that can compete.
With John Zhuwawo now staying on after his proposed move to Ajax Cape Town collapsed, Caps United should have a formidable attack ahead of the next term.
Caps United have been hit by a player exodus over the last six months, losing no less than six key players, casting doubts on their chances of winning the championship next season.
Players that have left Caps United are Ronald Chitiyo and Abbas Amidu, who joined Tunisian and Egyptian clubs respectively while Ronald Pfumbidzai joined South African Premiership side, Bloemfontein Celtic. Recently, Dominic Chungwa joined South Africa’s Polokwane City with Edmore Sibanda, signing for National First Division side Witbank Spurs.Advertisement