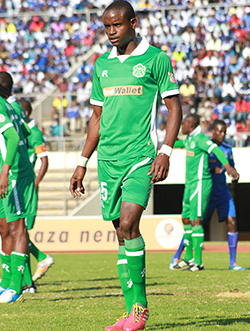 CAPS United have refused to release their players for the crucial All-Africa Games qualifier against Cameroon during the weekend of March 21-22, arguing the match falls outside the Fifa calendar for international matches.
United are now under the guidance of English coach Mark Harrison. The Harare giants have three players in the Warriors squad called up by Calisto Pasuwa who include full-back Ronald Pfumbidzai, Takudzwa Mahori and Kudzai Nyamupfukudza.
Zifa Communications Manager Xolisani Gwesela however, said he would engage Caps United over the issue to have the players join camp.
“We have encountered problems with some clubs refusing to release players for this match on the grounds that it is not on the Fifa calendar for international matches. This is a problem beyond anybody’s control,” said Gwesela.
“As Zifa we had done our part to call all players needed by the coaches. We will however continue to talk to the clubs so that they release the players.
“As for the local clubs we will engage them, I don’t think we can have a problem with them.”
Meanwhile Mamelodi Sundowns and Netherlands based-side Vitesse are also refusing to release Kuda Mahachi and Marvelous Nakamba respectively.
However, Sundowns according to Gwesela, have said they might release Mahachi five days before the match.
Pasuwa had called up a 26 member squad for the qualifiers with goalkeepers Tatenda Gwademba of Harare City and Akim Abdular who is based in Australia being roped in.
First choice goalkeeper Bernard Donovan and second choice Tatenda Mukuruva are also part of the squad.
How Mine defender, Morris Kadzola has also been called up while Douglas Sibanda and Munyaradzi Diro Nyenye were shunted out.
Other new faces include Kudzai Nyamupfukudza, Malvern Gaki, Takudzwa Mahori, Talent Chawapihwa and Talent Chidhewu.
Young Warriors Squad
Goalkeepers
T Mukuruva (Dynamos), B Donovan How Mine), T Gwademba Harare City), A Abdular (Sunshine Dodges, Australia)
Defenders
B Moyo (Dynamos), M Kadzola (How Mine), R Pfumbidzayi (Caps United), L Chakoroma (Buffaloes), K Moyo (FC Platinum), T Hadebe (Highlanders)
Midfielders Advertisement